World War Two: Under the Shadow of the Swastika (Campfire Graphic Novels) (Paperback) 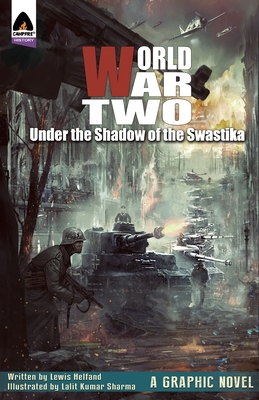 This volume of Campfire's graphic history of World War II deals with the war in Europe from the rise of the Nazis through to May 1945 and VE Day. World War II shows the effects of the war on the soldiers, the refugees, the victims and protagonists of the most terrible conflict the world has ever known. In a world that is forgetting the lessons history has to teach, this book is a reminder of the horrors that come from intolerance.

In the 1930s, a great evil was rising in the heart of Europe, a threat unlike any seen before. German leader Adolf Hitler, a madman bent on world domination, was raising an army and growing more violent by the day. The world knew that Hitler had to be stopped. But fearing a war, this growing threat of Hitler's Nazi army was left unchecked. The world simply watched as Germany sank into darkness. The world merely prayed that war would not breach their borders. The world waited. And they waited too long.

As cities fell to ruin and millions were slaughtered, the growing darkness of Hitler and his Nazi empire branched out far beyond Europe—to Asia and Africa and America—and soon threatened to claim the entire world. France, England, Russia, the United States… no single nation had the strength to combat this darkness, at least not on their own.

With the fate of the world hanging in the balance, the one final, desperate hope was that all of these nations united together might muster the strength to save humanity.

Lewis Aaron Helfand is a resident of Narberth, Pennsylvania and grew up wanting to write comic books. His journey to figure out how to do that has involved everything from studying sculpture and politics to traveling through Spain and Denmark to writing about adventure sports and sword making. He is currently merging all these diverse interests writing graphic novels for Campfire. Some of his recent titles include the award winning Nelson Mandela: The Unconquerable Soul, Mother Teresa: Angel of the Slums, and They Changed the World: Bell, Edison and Tesla.

Lalit Kumar Sharma was born in Delhi. An artist by nature, he expresses himself through the medium of comic book art. His career as an artist began at Diamond Comics, and since then he has also worked for Raj Comics and all the leading Indian comic book publishers. Dark, grim and dynamic drawing has always been his strong point. At Campfire he has used his strang, action-packed drawing style to illustrate the classics and biographies, and to bring history to life. Some of his recent titles include World War One: 1914-1918, Leonardo Da Vinci: The Renaissance Man, and The Strange Case of Dr Jekyll and Mr Hyde.

“This colorful, energetic primer on the most destructive of wars stresses mass-murderous Nazi tyranny and the primarily civilian resistance to it. . . Indian artist Sharma powerfully “brutalizes” mainstream comics style by thickening and tapering lines and by drawing figures in rapid motion. . . [and] fills the images more with emotion than gore, which is in keeping with the publisher’s educative mission. An excellent special-focus supplement to WWII studies.” — Booklist

World War Two: Under the Shadow of the Swastika “succeeds in being remarkably competent, complete and really quite readable. . . a brilliant book for a school reference work. . . a salient, conclusive lesson to all about this War and of course all war as a result. . . I have to admire this book for how much detail and info it did manage to dump on me, and the clarity and educational level of everything here is really quite superb – one of the better lessons to be had, then.” — John Lloyd, The Bookbag