Nobody Gets Out Alive: Stories (Hardcover) 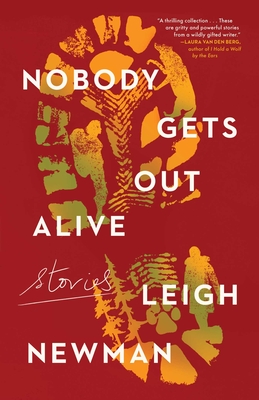 Nobody Gets Out Alive: Stories (Hardcover)

*A MOST ANTICIPATED book by Vogue, Literary Hub, The Millions, Good Housekeeping, and Oprah Daily*

Set in Newman’s home state of Alaska, Nobody Gets Out Alive is an exhilarating collection about women struggling to survive not just grizzly bears and charging moose, but the raw legacy of their marriages and families.

Alongside stories set in today’s Last Frontier—rife with suburban sprawl, global warming, and opioid addiction—Newman delves into remote wilderness of the 1970s and 80s, bringing to life young girls and single moms in search of a wilder, freer, more adventurous America. The final story takes place in a railroad camp in 1915, where an outspoken heiress stages an elaborate theatrical production in order to seduce the wife of her husband’s employer.

“Rich with wit and wisdom, showing us that love, marriage, and family are always a bigger and more perilous adventures than backcountry trips” (Kirkus Reviews, starred review), these keenly observed stories prove there are some questions—about love, heartbreak, and the meaning of home—that can’t be outrun, no matter how hard we try. Nobody Gets Out Alive is a dazzling foil to the adventure narratives of old.
Leigh Newman’s debut collection Nobody Gets Out Alive was longlisted for the National Book Award. Her stories have appeared in Harper’s, The Paris Review, The Best American Short Stories, One Story, Tin House, Electric Literature, American Short Fiction, and McSweeney’s Quarterly Concern. Her memoir about growing up in Alaska, Still Points North, was a finalist for the National Book Critic Circle’s John Leonard prize. In 2020, she was awarded a Pushcart Fiction Prize and an American Society of Magazine Editor’s Fiction Prize, as well as received the Paris Review’s Terry Southern Prize for “humor, wit, and sprezzatura.”  When not writing, she takes care of her two kids, two dogs, two chickens, and beloved, disgruntled cat.
"The collection shares a pool of characters who come and go, but the stories otherwise stand on their own. The characters are deeply crafted and filled with complexity. While their reappearances extend their individual histories, even when contained within a single story, we see multiple dimensions: good and bad, flaws and strengths."—The Chicago Review of Books

"[Newman’s] characters move between stories like pieces in a sliding puzzle…their backcountry bravado — shooting wolves from turboprops, using float planes like taxis, plucking mastodon fossils from melting glaciers — is animated by Newman’s flair for description…We are all marching toward our demise, the title of Newman’s collection reminds us. But, as these vivid tales make clear, it is our 'flinty, fearsome resolve' for survival that gives us life.”—The New York Times Book Review

"Newman’s electric debut collection (after the memoir Still Points North) follows hardscrabble women in Alaska whose rough exteriors conceal myriad vulnerabilities… throughout, Newman’s prose is both distinctive and efficient…the author’s crisp portrayal of the Alaskan landscape and rugged culture holds the collection—and its magnetic characters—together. Newman firmly establishes herself as a talent with these stunning stories.” —Publishers Weekly, starred review

“The Alaskan wilderness is unforgiving, and so is life for the people who live there. In this arresting collection of stories, we meet people who are fighting not only the snowy tundra, but addiction, heartbreak, complicated families and the demons so many of us carry with us, regardless of when or where we live.”—Good Housekeeping, Most Anticipated

"The women in this absorbing debut collection are larger than life, perhaps because this is what the harsh Alaska landscape demands ... These stories are rich with wit and wisdom, showing us that love, marriage, and family are always a bigger and more perilous adventures than backcountry trips ... Bighearted stories of domestic discord by a writer with a cleareyed view of Alaska's romance and hardscrabble realism."—Kirkus Reviews (starred)

“From Newman, whose memoir Still Points North was a finalist for the National Book Critic Circle’s John Leonard Prize, Nobody Gets Out Alive highlights women struggling to get by in rugged Alaska.”—Library Journal, pre-pub alert

"I have never been to Alaska, but it came alive for me from many wonderful angles in Leigh Newman's irresistible fiction debut. I didn't want Nobody Gets Out Alive to end — to have to leave behind its warmth and soul and glittering writing, its honesty and its laughter in the dark. The stories in these pages are, as one memorable character in this book observes of another's tall tales, 'funny and self-lacerating and so horrifically precise about our love and fury for each other.' You feel you're in the company of a writer who has embraced unpredictability and breathes deeply while seeing far."—Jonathan Lee, author of The Great Mistake

"The stories in Nobody Gets Out Alive are big and lush, full of exuberance, sorrow, and swagger. The characters roam highways, rivers, backwoods, and bus routes searching for something immense. Their boundless needs and vast hopes have nowhere to go except Alaska—a place that Newman brings wholly to life for us, alongside delight and devastation."—Chia-Chia Lin, author of The Unpassing

“Nobody Gets Out Alive is a thrilling collection. Leigh Newman’s indelible characters chart the turbulent waters of hope and regret in an Alaskan landscape that crackles with danger and wonder. These are gritty and powerful stories, from a wildly gifted writer.” —Laura van den Berg, author of I Hold a Wolf by the Ears

"Leigh Newman’s Nobody Gets Out Alive is a fierce, funny, heart-wrenching book. With wit and precision, Newman lays out the entrails of the frontier narrative—part fortune-teller, part taxidermist—and shows us the bravery that masks recklessness and desperation, and the entwined beauty and devastation of Alaska’s landscape and people."
—Maile Meloy, author of Both Ways Is the Only Way I Want It

"Emotionally astute and slyly funny, Nobody Gets Out Alive is a commanding examination of home, family, intimacy, and self-reliance. With exacting precision and endless wit, Newman gracefully leaps into any perspective she pleases—you get the impression she’s not only writing unforgettable, brilliantly complex characters, she’s somehow inventing souls. This is a stunningly beautiful debut collection by a masterful prose stylist."—Kimberly King Parson, National Book Award Finalist, Black Light

"Nobody Gets Out Alive is an astonishingly beautiful collection: wickedly smart, psychologically rich and expertly crafted. Every one of these stories knocked me sideways. Leigh Newman is one of the wisest, funniest and most compassionate writers working today."—Molly Antopol, author of The Unamericans

"Behold a storyteller completely at home in herself. Each story in Nobody Gets Out Alive flashes a new facet of Leigh Newman's singular style. This is a stellar collection with wit and wisdom galore."—Claire Vaye Watkins, author of Battleborn, Gold, Fame, Citrus, and I love you but I've chosen darkness

"Nobody Gets Out Alive is a stunning debut collection, with the most generous ratio of wickedly funny details to devastating plot lines. It's a joy to travel through these characters' overlapping Alaskas, where violent longings go thrashing under the frozen stillness of the everyday, and the hard, hot work of navigating the wilderness of family can give way at any moment to 'a dazzle of ice and blue and light.'"—Karen Russell, author of Swamplandia!