Fifty in Reverse: A Novel (Hardcover) 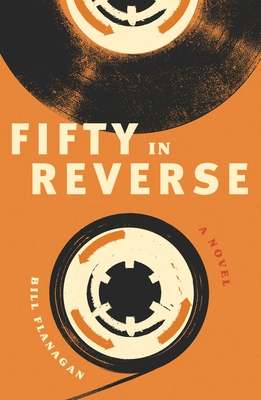 Fifty in Reverse: A Novel (Hardcover)

Something about this year makes time-travel stories particularly fun escape reading. It’s 1970 and teenage Peter is seeing a therapist because he believes that he’s a 65-year-old man from the year 2020. Peter makes the best of his odd situation by joining a band and copyrighting hit songs from the future, while trying to solve the riddle of how he can get back home, or whether that future only exists in his head, or whether it still exists at all when 1970 turns out not exactly as he thinks he remembers. A fast read with good what-ifs. -Ruth

— From Fiction - New in Hardcover
From TV personality and radio host Bill Flanagan comes a “funny and sharp” (Rosanne Cash, Grammy Award–winning singer/songwriter and bestselling author) time-traveling adventure novel about how the past never gives up its hold on the present and how even sixty-five-year-olds are still kids at heart.

If you had the chance to live your life over again, knowing everything that you know now, would you take it? Would you still take it if it meant losing everything you had today? Would a second chance to correct every mistake and missed opportunity be worth giving up the world you know and the life you have built? In Fifty in Reverse, fifteen-year-old Peter Wyatt does just that.

In the spring of 1970, Harvard psychologist Terry Canyon is introduced to Peter, a quiet kid from a wealthy family who has been suspended from ninth grade for stripping off his clothes in Algebra class. When Terry asks Peter why he did, the boy explains that he was trying to “shock myself awake.” It turns out that Peter believes he is a sixty-five-year-old man who went to sleep in his home in New York in the year 2020 and woke up in his childhood bedroom fifty years earlier.

Hilariously depicting Peter’s attempts to fit in as a fifteen-year-old in 1970 and to cope with the tedium, foolishness, and sexual temptations of high school as he tries to retain the sense of himself as a sixty-five-year-old man, Fifty in Reverse is a thought-provoking and enlightening novel about second chances and appreciating where you are in life.
Bill Flanagan is an American author, television producer and radio host. He wrote the novels A&R, New Bedlam, and Evening’s Empire, the nonfiction books Written in My Soul and U2 at the End of the World, and the humor collection Last of the Moe Haircuts. Flanagan hosts the Sirius XM radio shows Northern Songs and Flanagan’s Wake and contributes essays to CBS Sunday Morning. He created and produced the TV series Storytellers and Crossroads and has worked on series and specials for NBC, ABC, HBO, MTV, Nickelodeon, PBS, the Sundance Channel, and Showtime. Flanagan has written for Spy Magazine, Rolling Stone, Vanity Fair, Esquire, GQ, Air Mail, Men’s Journal, and The New York Times. He wrote the 2020 film Jimmy Carter: Rock and Roll President.
“Bill Flanagan has inherited the spirit of Kurt Vonnegut and written us a sharp, funny, charming novel about the enduring fantasy of living a life twice.  What if we could live knowing what we know now?  And what might happen to those around us?  This is a wonderful comedy with a distinct social undertow."  —Colum Mccann

"...there are chapters of lovely insight into the human condition, and wonderful depictions of longing and connection...a quick and enjoyable read, especially if you know Seventies rock."—Katie Stine, Historical Novel Society

“If HG Wells had imagined a jukebox rather than “Time Machine” he might still not have located the humour and the heart in this wonderful tale." –Elvis Costello, GRAMMY-winning singer/songwriter and Rock and Roll Hall of Famer

"As a devoted fan of Flanagan’s novels and essays on music, as well as his humor pieces and journalism, I was prepared to love Fifty in Reverse. What I was not prepared for, however, was my attachment to the characters, who have stayed with me like friends, and the seductive notion of time traveling to my own youth, which, on paper, sounds like an exercise in regret, but in Bill Flanagan’s funny and sharp narrative becomes an achingly beautiful revelation with full knowledge of the people you will meet by chance and love forever, the friends who will disappear, the music that will stay with you for your life, and the sacrifices your parents make, unnoticed in the necessary selfishness of childhood.  I also did not expect to find myself in tears as I finished the last page, not from any nostalgia or sentiment, but from a piercing understanding of the trajectory of the lives of parent and child, and the temporality of even those things that feel the most real and permanent. He is a storyteller with a mastery of revealing moments and understated cultural and musical references, particularly satisfying to fans of seminal rock and roll and mid-20th Century history. I look forward to re-reading Fifty in Reverse and reveling again in that moment in time, and the fascinating idea of personal prescience that defines a character, enlightens, and heals." –Rosanne Cash, GRAMMY-Winning Singer/Songwriter and Bestselling Author

"There’s Woody Allen’s Midnight in Paris. There are classics from Freaky Friday to Back to the Future to Groundhog Day. But when it comes to time travel, there’s always room for more. Bill Flanagan’s version, Fifty in Reverse, is an ode to the golden, if fraught, age of his youth—60s and 70s America—and follows a man well past middle age who wakes up one day to discover he is 15 again."—Tom Freston, AirMail