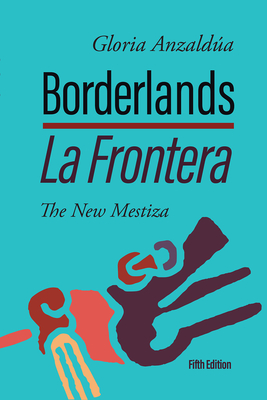 The U.S-Mexican border es una herida abierta where the Third World grates against the first and bleeds. And before a scab forms it hemorrhages again, the lifeblood of two worlds merging to form a third country--a border culture.--Gloria Anzald a

Rooted in Gloria Anzald a's experience as a Chicana, a lesbian, an activist, and a writer, the essays and poems in BORDERLANDS/LA FRONTERA: THE NEW MESTIZA profoundly challenged, and continue to challenge, how we think about identity. BORDERLANDS/LA FRONTERA remaps our understanding of what a border' is, presenting it not as a simple divide between here and there, us and them, but as a psychic, social, and cultural terrain that we inhabit, and that inhabits all of us.

The emotional and intellectual impact of the book is disorienting and powerful...all languages are spoken, and survival depends on understanding all modes of thought. In the borderlands new creatures come into being. Anzald a celebrates this 'new mestiza' in bold, experimental writing.--The Village Voice

Anzald a's pulsating weaving of innovative poetry with sparse informative prose brings us deep into the insider/outsider consciousness of the borderlands; that ancient and contemporary, crashing and blending world that divides and unites America.--Women's Review of Books