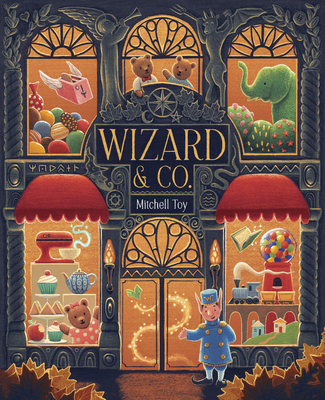 
BACKORDERED - Availability will be delayed
We stumbled through the door into a foyer laced with gold,
Where chiming elevators shone with magic charms of old.
'I do believe this note is yours,' declared a goblin friend, '
One hundred Hocus Pocus pounds is quite a lot to spend.'

Ride the magic elevator to find something special at the enchanted department store, Wizard & Co. Every magical floor is filled with wonderful and spectacular temptations. But the greatest magic of all might be not what you find on the shelves, so expect the unexpected.

Illustrator Mitchell Toy brings to life the enchanted department store of every child's dreams, through his signature beautifully illustrated scenes, with each page filled with spectacular hidden details.
Mitchell Toy grew up in Melbourne where his passion and love for the city, its culture and its people inspired him to create his first children’s book, Midnight City.

Mitchell studied Art History at Oxford, his work has been twice exhibited in the Fezilla Studio Gallery in Prahran and two of his paintings hang in Canberra’s Parliament House.

Mitchell has worked as a cartoonist and court sketch artist, among other roles, for the Herald Sun newspaper for almost ten years. His cartoon, Toy’s Melbourne, has featured each week in the Sunday Herald Sun for the last five years.