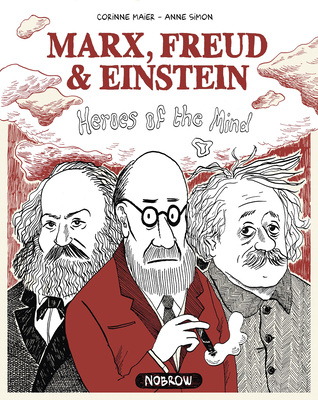 
On Our Shelves Now
Through Anne Simon's irreverent illustrative comics style and Corinne Maier's witty, researched writing, readers can join the fight against capitalism with Karl Marx, meet the father of psychoanalysis Sigmund Freud, and discover the fundamentals of physics with Albert Einstein. Explore complex scientific, psychological and political ideas in a wryly intelligent graphic novel format!
Anne Simon was born in 1980 in France. She studied in the Beaux-Arts in Angoulême, and then in the École Nationale Supérieure des Arts Décoratifs in Paris, one of the most prestigious art schools in France. In 2004, she received the "New Talent" prize at the Angoulême festival, and she released her first comic book "Persephone in the Underworld" in 2006.

Corinne Maier is a French non-fiction writer, economist, psychoanalyst and historian, who has published twenty books in her native country (essays, social critique, humor, comics...). Some of them had been translated into several languages, including the international best-sellers "Hello Laziness" (Pantheon, USA) and "No Kids" (McLelland & Stewart, Canada). She is also the author of three graphic biographies, "Freud", "Marx" and "Einstein", in collaboration with Anne Simon, published in English by Nobrow.
I enjoyed the three Nobrow graphic biographies by Corinne Maier and Anne Simon when I read them last year. I learned new things about the subjects and appreciated the storytelling. Now Nobrow is reissuing the three of them in one volume as Marx, Freud, Einstein: Heroes of the Mind. [...] the combined edition will be a great value.
—Comics Worth Reading