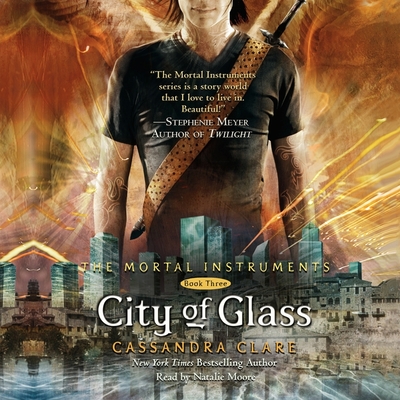 This is book number 3 in the Mortal Instruments series.

Love is a mortal sin, and the secrets of the past are deadly. Plunge into the third installment novel in the internationally bestselling Mortal Instruments series and "prepare to be hooked" (Entertainment Weekly)--now with a gorgeous new cover, a map, a new foreword, and exclusive bonus content City of Glass is a Shadowhunters novel.To save her mother's life, Clary must travel to the City of Glass, the ancestral home of the Shadowhunters--never mind that entering the city without permission is against the Law, and breaking the Law could mean death. To make things worse, she learns that Jace does not want her there, and Simon has been thrown in prison by the Shadowhunters, who are deeply suspicious of a vampire who can withstand sunlight. As Clary uncovers more about her family's past, she finds an ally in mysterious Shadowhunter Sebastian. With Valentine mustering the full force of his power to destroy all Shadowhunters forever, their only chance to defeat him is to fight alongside their eternal enemies. But can Downworlders and Shadowhunters put aside their hatred to work together? While Jace realizes exactly how much he's willing to risk for Clary, can she harness her newfound powers to help save the Glass City--whatever the cost?

Cassandra Clare is the #1 New York Times and USA TODAY bestselling author of The Red Scrolls of Magic, Lady Midnight, Lord of Shadows, and Queen of Air and Darkness, as well as the internationally bestselling Mortal Instruments series and Infernal Devices trilogy. She is the coauthor of The Bane Chronicles with Sarah Rees Brennan and Maureen Johnson; Tales from the Shadowhunter Academy with Sarah Rees Brennan, Maureen Johnson, and Robin Wasserman; and Ghosts of the Shadow Market with Sarah Rees Brennan, Maureen Johnson, Kelly Link, and Robin Wasserman. Her books have more than 50 million copies in print worldwide and have been translated into more than thirty-five languages and made into a feature film and a TV show. Cassandra lives in western Massachusetts. Visit her at CassandraClare.com. Learn more about the world of the Shadowhunters at Shadowhunters.com. Natalie Moore's theater credits include Mariane in The Miser at the La Jolla Playhouse as well as work at the Guthrie Theater, Actors' Theater of Louisville, A.R.T, Theatre de la Jeune Lune, Santa Fe Stages, Minneapolis Children's Theater, and Park Square. She has also been seen on Late Night with Conan O'Brien.