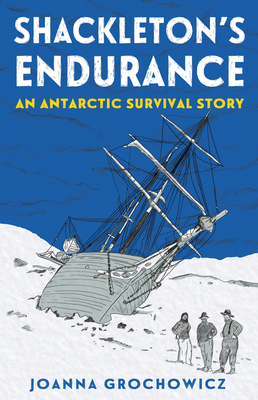 Adrift on the Antarctic pack ice with no means of escape and no hope of rescue, Ernest Shackleton and his men are surely doomed.

In August 1914, Ernest Shackleton and his men set sail for Antarctica, where he planned to cross the last uncharted continent on foot. In January 1915, his ship, the Endurance, became locked in pack ice and later, sank without a trace. To survive, Shackleton and his crew of 27 men must undertake a trial even more extreme than their planned crossing of the frozen continent. Their aim is to make it home against unbeatable odds, with only a life boat to cross the heavy seas of the South Atlantic—and the life-saving power of Shackleton's extraordinary leadership skills.

Praise for Amundsen's Way & Into the White:

"Joanna Grochowicz's narrative non-fiction brings to life characters and events without skimping on historical fact. While the extensive research underpinning the book is apparent, it is the narrative voice that carries us forward." —New Zealand Review of Books

"Amundsen's Way is a thoroughly enjoyable and readable story about some very brave people coping with horrific challenges. It is ideal for making young readers aware of the pleasures of long-form non-fiction books." —Magpies

"For thrill-seeking middle school students who love nonfiction adventure stories...the adventures of Scott and his crew don't disappoint." —School Library Journal
Joanna Grochowicz is a polar historian and author. Fast-paced and exquisitely written, her novels of early exploration reveal in fascinating detail the human aspirations and tragedies that have shaped our understanding of the polar regions. Drawing on diaries, letters, and expedition narratives from archives and personal collections around the world, Grochowicz brings to light new and often overlooked elements of heroic age exploration. Realistic portrayals of historical figures and the interplay of personalities lend her work a grittiness and authenticity that is not often present in historical writing for children and young adults.
“An unusually vivid retelling of the epic survival tale.” —Kirkus Reviews