One Headlight: An Alaskan Memoir (Paperback) 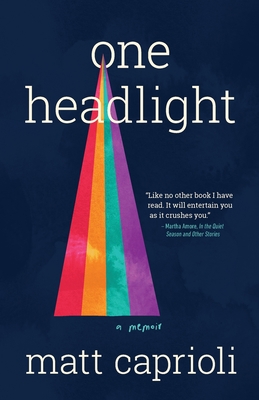 **A Lambda Literary Most Anticipated Read**

﻿﻿﻿"Like no other book I have read. It will entertain you as it crushes you." - Martha Amore, Editor of Lambda Literary Nominated Building Fires in the Snow

"Frank and insightful...An affecting and surprising remembrance about the responsibilities of parents and children." - Kirkus Reviews

The debut memoir from Matt Caprioli, a young college

Lecturer in New York City, will inspire and thrill you even as it

ONE HEADLIGHT: AN ALASKAN MEMOIR (Cirque

Alaska, in a church-donated Mustang with no snow tires, a

missing passenger window, and one headlight.

conflict have been published in numerous literary journals,

including Epiphany, Opossum, and Best Gay Stories. In 2021, his story on moving to Manhattan was featured in

episode four of the Netflix series Worn Stories, produced by

Whatever your background, ONE HEADLIGHT is a

deeply human book that will move readers for its insightful,

love, and memory. ONE HEADLIGHT will especially resonate

with those who have lost a loved one to cancer, who are

interested in the craft of memoir, coming-of-age stories, parent-child

MATT CAPRIOLI is a queer Alaskan/NYC creative writer and Lecturer in the English Department of Lehman College, City University of New York. His essays and fiction have appeared in Epiphany, Breadcrumbs, Opossum Literary, Best Gay Stories 2017, and Newtown Literary. As a journalist, he was a regular contributor to Anchorage Press and The Red Hook Star-Revue. He holds an MFA from Hunter College and studied at Columbia University and The University of Alaska, Anchorage. He lives in Astoria, Queens, with his partner.