Graves for Drifters and Thieves (Paperback) 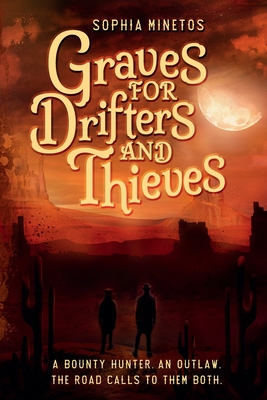 The Hespyrian West is a place for legends and lawless men. Here, Jae Oldridge works as a bounty hunter, getting by with her wits, her magic map, and not much else. At seventeen, she hunts not for money or glory, but to find her missing father-kidnapped by ghost riders three years back.

When a saloon brawl brings Jae to the enigmatic Harney gang, she feigns interest in assisting them, hoping to turn them in later on. Survivors of the Arrowwood War, the gang pillages silver, without interest in much else... and no one knows why. The gang is led by two brothers: the stern, commanding Halston and headstrong, fiery Hodge. Joining them is an aristocrat-turned-outlaw, a rugged, snake-skinned Azmarian, and a young storyteller with a mysterious past.

Trekking across the wilderness, the group encounters warlocks, monsters, and gunfights in the service of Sterling Byrd: the gang's crooked boss. Jae learns that the gang is not what they seem. They also stand on a razor's edge; not just with the law, but with Sterling himself. Jae finds herself growing closer to the Harneys... especially Halston.

Staying with the gang could lead Jae to a noose's end, but Halston harbors a secret that could change her life forever. It is then Jae learns that her loyalties-wherever they may lie-do not come without a price.