HANARIA and the Sorcerer's Son (Paperback) 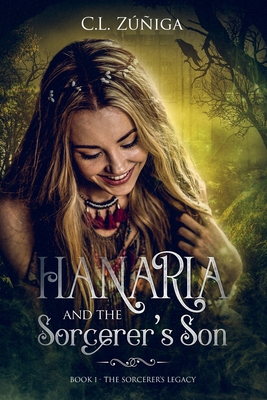 When the restless princess Hanaria sees an ominous glow in the night sky, she disregards the Advisor's warnings and follows a hidden passage into the restricted Wild Woods to discover its source. What she encounters leads her into a world of ancient legend, sorcery and secrets that hide her true identity. By the next morning, she has mysteriously forgotten everything, but the residue of fire ash on her boots ignites her wonder...and that of the sorcerer's son.

And so begins Hanaria's powerful adventure into fate, love, doom and destiny. With nothing but her trusty blade and reluctant handmaiden for help, she must navigate mysterious dreams, ominous encounters and a growing restlessness inside to discover the truth of who she is. As the time of the convergeance approaches, a lineage of secret guardians work tirelessly to identify and protect her. But a small band of dark sorcerers hidden amongst them, the Formorii, seek to destroy her to fulfill The Prophecy and resurrect their master to power.

Can Hanaria uncover the secret that masks her true identity to meet her powerful destiny? The fate of all she loves depends on it.

The Sorcerer's Legacy series tells the tale of Hanaria, a young maiden whose life is abducted one fateful night centuries before she is ever conceived. Generations of secrets later, she is thrust into a quest of uncovering the truth of who she is. Step by step she fights her way through a maze of secrets set in motion by a mad priest and protected at the hands of the mysterious guardians, slipping into a mystical world of deception and sorcery. In the end she unravels an illusion so grand, even the guardians overlooked it.