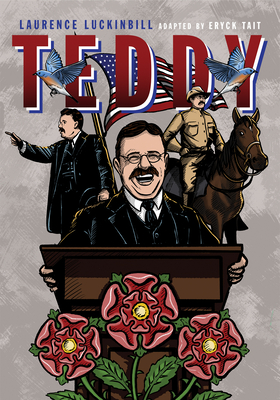 By Laurence Luckinbill, Eryck Tait (Adapted by)
$24.95
NONE IN-STORE but we can probably order it for you

July 1918. Preparing to speak to an eager audience, 61-year-old Teddy Roosevelt receives the telegram that all parents of children who serve in war fear most: His son Quentin's plane has been shot down in a dogfight over France. His fate is unknown. Despite rising fear for his youngest son, Teddy takes the stage to speak to his beloved fellow citizens. It is, he says, my simple duty. But the speech evolves from politics and the war, into an examination of his life, the choices he's made, and the costs of his Warrior Philosophy. Overflowing with his love of nature, adventure, and justice, Teddy dramatically illustrates the life of one of America's greatest presidents. His many accomplishments ranged from charging up San Juan Hill in Cuba as commander of the Rough Riders, to facing down U.S. corporate monopolies, to launching the Great White Fleet, building the Panama Canal, and the preservation of hundreds of millions of acres of natural American beauty. And finally, to the vigorous life at Sagamore Hill and his immense pride in a beloved and rambunctious family. Teddy reveals how even the greatest of men is still just a man, and how even the most modest man can grow to be great.

Laurence Luckinbill, is a renowned actor, playwright, and director who has worked in television, film, and theater for decades. Well known as Spock's brother Sybok in Star Trek V: The Final Frontier, Laurence is an Emmy winning, Tony Award-nominated actor who has toured the country in acclaimed solo plays depicting the lives of Lyndon Johnson, Clarence Darrow, Teddy Roosevelt, and Ernest Hemingway. He has five children and lives in California with his wife, Lucie Arnaz. Eryck Tait is a Brooklyn based illustrator and designer. He works primarily in storyboarding and concept art for advertising as well as freelance illustration and fabrication. He is currently the Manager of Illustration for Ogilvy in Manhattan and resides in Bushwick with his wife, three cats, and one terrible dog.