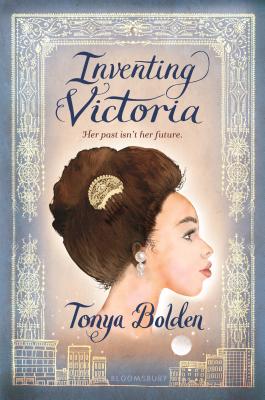 In a searing historical novel, Tonya Bolden illuminates post-Reconstruction America in an intimate portrait of a determined young woman who dares to seize the opportunity of a lifetime.

As a young black woman in 1880s Savannah, Essie's dreams are very much at odds with her reality. Ashamed of her beginnings, but unwilling to accept the path currently available to her, Essie is trapped between the life she has and the life she wants.

Until she meets a lady named Dorcas Vashon, the richest and most cultured black woman she's ever encountered. When Dorcas makes Essie an offer she can't refuse, she becomes Victoria. Transformed by a fine wardrobe, a classic education, and the rules of etiquette, Victoria is soon welcomed in the upper echelons of black society in Washington, D. C. But when the life she desires is finally within her grasp, Victoria must decide how much of herself she is truly willing to surrender.

“Seamlessly weaves aspects of black history into the detailed narrative. . . . Victoria emerges as a fully realized character, a product of all her experiences. The depiction of Washington, D.C.'s African-American elite is rich and complex . . . A compelling and significant novel.” —Kirkus Reviews, starred review

“Bolden captures the period with meticulous detail. Appearances by prominent African American luminaries of the era . . . extend the authenticity of this engrossing coming-of-age story.” —The Horn Book Magazine

“Seeks to illuminate 'an often-neglected aspect of black history: the black middle class and black aristocracy of the past.' The rich descriptions of people and life in early America will fascinate readers as the book introduces them to this widely overlooked population in history.” —Booklist

“Offers up portraits of the African-American speakers and activists who were fighting against the rising racial animus. Through Essie's journeys and experiences, readers get a primer in . . . prominent historical figures and events.” —BCCB

"Bolden shines a light into a part of history rarely seen . . . A must for YA collections." - School Library Connection

"Bolden has created a sweeping and exhilarating story of a teen girl filled with hope and perseverance. . . . A truly unique and necessary addition to the genre." - BookPage

“The well-executed premise, a compelling love story, and unique historical details will appeal to fans of Ruta Sepetys's Salt to the Sea . . . This moving and engrossing portrayal of a little-known historical tragedy belongs on all YA shelves.” —School Library Journal, starred review, on CROSSING EBENEZER CREEK