And Then They Were Doomed (A Little Library Mystery #4) (Paperback) 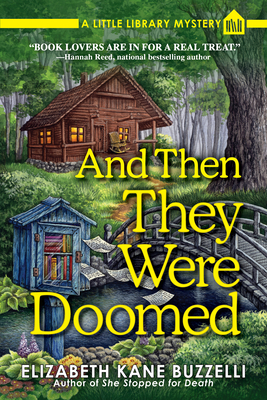 And Then They Were Doomed (A Little Library Mystery #4) (Paperback)

This is book number 4 in the A Little Library Mystery series.

Zoe Zola is one of ten invitees to an Agatha Christie symposium. Tempers flare...and then there are nine. Can Jenny Weston save Zoe from murder on the Upper Peninsula?

Little Person author Zoe Zola believes that one of the unluckiest things in life is to receive an invitation—in the form of a letter edged in black—to an Agatha Christie symposium at an old Upper Peninsula hunting lodge. Her reluctance dissipates when she learns that the organizer is named Emily Brent—the name of a character poisoned by cyanide in Christie’s And Then There Were None.

As a dreary rain soaks the U.P., Zoe and nine other Christie scholars—each of whom bears a vague resemblance to one of the classic mystery novel’s characters—arrive at the lodge. At the opening night dinner, arguments flare over the experts’ discordant theories about Christie. Next morning, the guests find one particularly odious man has gone—whereabouts and reasons unknown. Such a coincidental resemblance to a work of fiction is surely impossible; therefore, it appears to be possible.

As the guests disappear, one by one, Zoe resolves to beat a hasty retreat—but her car won't start. She calls her friend, amateur sleuth/little librarian Jenny Weston, but Jenny will have to wait out a storm off Lake Superior before she can come to the rescue. If Zoe’s to stay alive to greet Jenny when she eventually arrives, she’ll have to draw on everything she knows about Agatha Christie’s devilish plots in Elizabeth Kane Buzzelli’s fourth tantalizing Little Library mystery.
Elizabeth Kane Buzzelli lives in Mancelona, MI. She has published ten novels, one work of non-fiction, and several short stories, which have been produced onstage, read on NPR, and published in several newspapers. For many years she taught writing at the International Women’s Writing Guild summer program at Skidmore College and currently teaches at Northwestern Michigan College.
Praise for And Then They Were Doomed:
"A dark, creepy, character-driven thriller with a particularly devious plot."
—Kirkus Reviews

"Entertaining...This entry is good fun for both Christie and puzzle fans."
—Publishers Weekly

“Buzzelli presents a good story with lots of twists and turns but enough clues to keep the reader turning the page to meet the next part of the conundrum.”
—New York Journal of Books

“A deliriously twisted and dramatic tale of suspense...Enthusiastically recommended to connoisseurs of the genre, and especially of Christie's timeless thrillers.”
—Midwest Book Review

"If you are a fan of Agatha Christie...you will enjoy it that much more."
—My Shelf

"I love Agatha Christie and couldn’t resist a book featuring a twist on one of her classic mysteries!"
—Fresh Fiction

"An intriguing mystery...And Then They Were Doomed will appeal most to fans of Agatha Christie."
—The Strand Magazine

"Join Zoe, Dora, and Jenny as they solve a mystery, enjoy friendship, and share the love of books."
—Tulsa Book Review

Praise for In Want of a Knife:
“A vivid portrait of small-town life [with] quirky, well-drawn...characters.”
—Booklist

“Buzzelli’s well-developed characters are the stars of the show in a complex tale that tips more than a hat to Pride and Prejudice.”
—Kirkus Reviews

Praise for She Stopped for Death:
“[A] suspenseful sequel...A riveting climax will have readers on the edge of their seats.”
—Publishers Weekly

“Second in the Little Library series, this one nicely captures the feel of a summer tourist town. The backdrop of Zoe’s new book and the connection of the poetry of Emily Sutton to that of Emily Dickinson add welcome literary touches.”
—Booklist

“The friendship between Jenny Weston and her quirky next-door-neighbor Zoe Zola—as well as the inclusion of literary references—continues to be a highlight of the unique Little Library Mystery series...An enjoyable read!”
—RT Book Reviews

“The characters are interesting, and believable, which is a delight...Buzzelli sets the groundwork well, and ups the tension in the final chapters. This is the second book in the Little Library series, and good enough to make one think about finding the first.”
—Reviewing the Evidence

“An enchanting mystery with a delightful cast of characters and snappy dialogue. Book lovers are in for a real treat.”
—Hannah Reed, national bestselling author of the Scottish Highlands mysteries