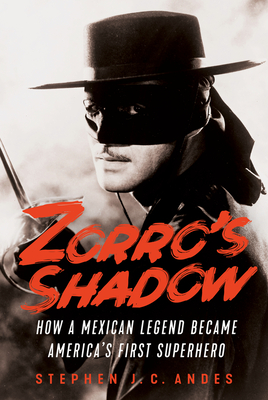 By Stephen J.C. Andes
$18.99
NONE IN-STORE but we can probably order it for you

“SADDLE UP! Andes takes us on an exhilarating, dust-kicking ride through the actual origins and history of the first hemispheric Latinx superhero: Zorro.” —Frederick Luis Aldama, editor of Tales from la Vida: A Latinx

Zorro’s Shadow explores the masked character's Latinx origins and his impact on pop culture—the inspiration for the most iconic superheroes we know today.

Long before Superman or Batman made their first appearances, there was Zorro. Born on the pages of the pulps in 1919, Zorro fenced his way through the American popular imagination, carving his signature letter Z into the flesh of evildoers in Old Spanish California.

Zorro is the original caped crusader, the first masked avenger, and the character who laid the blueprint for the modern American superhero.

Revealing the length of Zorro’s shadow over the superhero genre is a reclamation of the legend of Zorro for a multiethnic and multicultural America.

Stephen J. C. Andes is an associate professor of history at Louisiana State University. He is the author of The Mysterious Sofía and The Vatican & Catholic Activism in Mexico & Chile.

“Zorro’s Shadow is a wonderfully fascinating account of a pop specter that has long haunted North America: Zorro, a settler-colonial avenger brought to life by Stephen J. C. Andes’s dogged archival research and sharp interpretation.” —Greg Grandin, author of Fordlandia and The End of the Myth

“Zorro's Shadow is the history I've been waiting for all my life, without even knowing it.” —Jeffrey Mariotte, Goodreads ​

“...a wildly entertaining journey. Andes leaves no stone unturned in his quest for the first superhero on the continent. Just in time for the original caped crusader’s 100th anniversary, you owe yourself a look through this fun and fascinating ride.” —Kilewy, Goodreads

“In this swashbuckler of a ride, Andes powerfully excavates the true significance of that swish-slash Z: the super-symbol that signifies the strength, struggle, and spirit of Latinx folx yesterday, today, and tomorrow.” —Frederick Luis Aldama, editor of Tales from la Vida: A Latinx

“Zorro’s Shadow is definitely a ‘come for the geeky details, stay for the powerful insight’ kind of book. Would recommend!” —Noelle, Goodreads