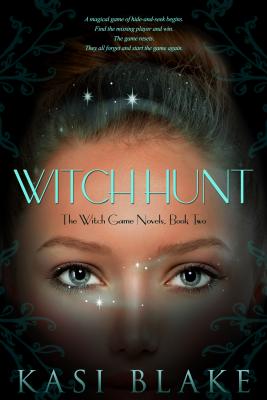 This is book number 2 in the The Witch Game Novels series.

A magical game of hide-and-seek begins.

Find the missing player and win.

They all forget and start the game again.

Seventeen-year-old Starr Hughes hasn't believed in magic since the day her mother died. As an aspiring reporter, the only thing she cares about is cold, hard facts. So when she hears the popular kids at school (the It-Squad) are about to start a secret game, she wants every detail, especially since she has a major crush on gorgeous Dylan Winchester. Hiding under the headmaster's desk, planting bugs, and breaking into a classmate's home are all on her to-do list. With her boy-crazy best friend Lily at her side, Starr discovers that witches are not only real, but they also need her help. Someone is using the game to steal their memories, their powers, and perhaps even their lives.

If you ask Kasi Blake how old she was when she started writing, she will probably say twelve. That's when she wrote her first short story. But it started long before then. Her first characters were invisible friends she played with as a child. In the third grade she wrote a one-page story about a mummy for an assignment, and the teacher read it to the class. Even though she was embarrassed, the other kids laughed in all the right places, and she realized she could affect other people through her writing. She loves to get lost in emotional stories, crying and laughing with the characters, so she thinks it's the most amazing thing in the world to be able to do this for other people.  Originally from California, she resides in the Midwest on a farm with cows, chickens, ducks, a dog, and two cats.