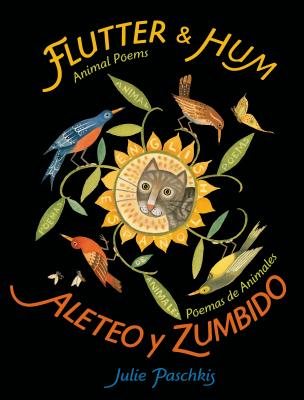 All sorts of animals flutter and hum, dance and stretch, and slither and leap their way through this joyful collection of poems in English and Spanish. Julie Paschkis's poems and art sing in both languages, bringing out the beauty and playfulness of the animal world.

JULIE PASCHKIS won a Boston Globe-Horn Book Honor for Yellow Elephant. She is also the illustrator for the Worldwide Stories for children and lives in Seattle.

JULIE PASCHKIS won a Boston Globe-Horn Book Honor for Yellow Elephant. She is also the illustrator for the Worldwide Stories for children and lives in Seattle.

“This is a celebration in text and art of words, of language, and of the spaces between and their possibilities. Appropriately enough, the book itself is also filled with possibilities-for reading aloud, for performing, for general language arts use-and kids will savor it however they meet it.” —The Bulletin, starred review

“* In 12 tantalizing poems, written in English and Spanish, Paschkis shows herself to be a sensitive observer of the animal kingdom, as well as of language itself, finding humor, eccentricities, and unexpected connections in both.” —Publishers Weekly, STARRED REVIEW

“An excellent Spanish-English collection of poetry on animals. . . . The Spanish and English poems are on opposite facing pages, with the artwork seamlessly sewing both versions together.” —SLJ

“The attributes that Brown has selected to share and her simple but impassioned telling combine with Paschkis's vibrant, decorative style for a book high in child appeal.” —School Library Journal on Pablo Neruda