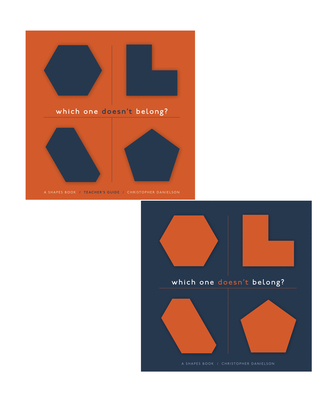 
NONE IN-STORE but we can probably order it for you
The Teacher's Bundle includes the 84-page Teacher's Guide, 36-page hardcover student book, and access to digital formats.

Which One Doesn’t Belong? has won the Mathical Book Prize, which will be presented to Christopher Danielson at the National Math Festival in Washington, DC on April 22, 2017. The Mathical Book Prize is an annual award for fiction and nonfiction books that inspire children of all ages to see math in the world around them.

Every colorful page of Christopher Danielson’s children’s picture book, Which One Doesn’t Belong?, contains a thoughtfully designed set of four shapes. Each of the shapes can be a correct answer to the question “Which one doesn’t belong?” Because all their answers are right answers, students naturally shift their focus to justifications and arguments based on the shapes’ geometric properties.

In the companion teacher’s guide, Danielson shows how to facilitate rich discussions and teach mathematical argumentation using Which One Doesn’t Belong? He models how to listen closely and respectfully to students’ ideas about shapes. Danielson synthesizes research about how children learn geometry, discusses the role of geometry in the mathematics curriculum, and gives plenty of practical advice about different ways to implement Which One Doesn’t Belong? in classrooms. He also discusses the mathematical ideas likely to emerge on each page and—drawing from his direct experience using Which One Doesn’t Belong? at several different grade levels—helps teachers anticipate and think about students’ likely answers.

Most curricula treat geometry as little more than vocabulary lessons. Which One Doesn’t Belong? and its accompanying guide are powerful, flexible resources teachers can use to provoke lively discussions and deep learning about shapes with students of all ages.
Christopher Danielson has worked with math learners of all ages, from teens in his former middle school classroom to his own children, from calculus students to elementary teachers to families who visit his Math On-A-Stick learning space at the Minnesota State Fair.
Stenhouse just released Christopher Danielson’s book, Which One Doesn’t Belong?
It’s a must-have if you’re a parent or a teacher with any interest in helping your children or students learn to speak mathematically.
There are few tasks that offer so much mathematical value yet require so few instructions as Which One Doesn’t Belong?
You see four mathematical objects. You ask kids, “Which one doesn’t belong?” You help them negotiate their overlapping and conflicting answers, developing vocabulary and the capacity for argument and abstraction along the way. That’s it.
You can find loads of great WODB prompts online but you can’t find Christopher’s unique presentation, narrative, and teacher’s guide, which is its own kind of graduate-level course in pedagogy.
Highly recommended.
Dan Meyer
August 31, 2016


Which One Doesn't Belong? is a brilliant new math book from Stenhouse. A MUST-HAVE if you teach math at any age I think.  The book is a picture book to use with kids along with a Teacher's Guide that is really a professional book by Christopher Danielson (whose website is also brilliantly amazing and one you'll want to visit often if you are a math teacher.)

But there was so much I didn't know!  This teacher guide--which is not so long but long enough to have depth and lots of new learning--helped me to understand how much more powerful this routine could be if I were more intentional as a teacher. The focus on geometry is interesting to me because it is an area of math teaching that I need to learn more about.  The book has an entire chapter called "How Children Become Geometers". This chapter helped me see the big jump kids do from elementary school to high school geometry and how much better we can do to help them build understanding by understanding the levels of understanding kids have and build around geometry.

The book is not a teacher's manual. Instead it is a way for teachers to use this routine in ways that empower students. Christopher Danielson shares language he uses when he introduces Which One Doesn't Belong. He shares examples from classrooms and he helps us better understand how children make sense of geometry through inquiry. He also puts the teacher in the decision-making chair as he invites us to make our own decisions about which pages to introduce to children when.  He also has tips for creating your own WODB set.

I love the answer key in this book.  The thing about this WODB sets is that they are designed so every answer could be the correct answer. So the answer key shares insights kids may notice about each shape and how they might respond.  It is a great resource and a great place to understand how to create your own sets (and help kids create their own.)

I love so much about this set of books. We had a conversation around the first page of the picture book last week and it was incredible. I introduced it as Danielson suggests in the book and we could have gone on for a very long time with ideas and thinking around these 4 shapes. I am excited to see where the conversation goes over the next several months.  This was a great way for me to take a routine I know and really deepen my understanding of it which will help my students.  Not only that but it helped me understand geometry in general and I now see the connection between this and several of Danielson's blog posts. I can't recommend this book enough.  If you are interested in inquiry based thinking and routines that empower kids AND if you want to learn more about quality talk in the math classroom, you need this book immediately!

A Year of Reading
Franki Sibberson


I received Danielson’s shapes book Which One Doesn’t Belong (WODB) with anticipation. I had been noticing Twitter activity on the math twitter blogosphere around the hashtag #wodb, and I was curious. The picture book includes a teachers’ guide, which I found valuable, especially the chapter on how to use the book in the classroom. It also explains the progression of a student’s geometry thinking, gives tips and examples of how to guide conversations, and defines some geometry terms to give rigor to my own knowledge. I referred back to the teachers’ guide many times when using the book in classroom settings.
Danielson writes, “I made this book to spark conversations, thinking and wonder” (p. 36). He has definitely succeeded. I enjoyed using this book to facilitate conversations with first and fourth graders. Students were engaged and were eager to communicate their ideas and listen to others. I noticed improvement in their ability to craft mathematical arguments in support of their choices. In the end, the fourth graders composed their own set of shapes to challenge others with “which one doesn’t belong.” I also shared the book with colleagues and even brought it out at a family party.
This bold-color shapes book is, as the author had hoped, “a resource that can make a meaningful contribution to geometry instruction” (p. 16) but can also reside in an elementary school library. It allows for meaningful conversations, unanswered questions, and deep dives into the subtle and complex similarities and differences between shapes.
—Laurel Pollard, Hanover Street School, Lebanon, New Hampshire.


I recently had the privilege of sharing Christopher Danielson’s book Which One Doesn’t Belong with my 5th grade math classes. Each page in his deceptively simple layout has four different figures. He asks the readers to choose “which one doesn’t belong” and tell why.
There’s also an accompanying teacher’s guide, with teaching ideas across the grades from kindergarten to high school. (Look inside the guide here.)
I thought the WODB activity might generate some interesting conversations and serve as a review for our geometry unit which we were concluding. So we gave it a try!
Excerpted from Which One Doesn’t Belong, Teacher’s Guide (Stenhouse Publishers, 2016)  Some of our observations
Even though the book says “every answer can be correct,” my students had a hard time believing that two, three, or four different answers could all be correct. We decided to find out!
We started off with the first set of figures and I asked everyone to think silently about which figure didn’t belong. I called on Noah to share his thoughts. Noah chose a figure and explained why that figure was different than the rest.
Sarah quickly chimed in saying, “I disagree! I think the third figure doesn’t belong.” She gave her reasons for choosing the third figure. After several of these disagreements, I asked the students to think about why they disagree. I asked them if they understood Noah’s reasoning. They all agreed that, based on Noah’s reasoning, he was correct.
They also agreed that Sarah’s reasoning was correct. One student then said, “You mean we are all correct?” The conversation had reached a turning point. As we explored more sets of figures, I didn’t hear, “I disagree” or “I think you’re wrong”. Instead, I heard “ Wow, I didn’t think of that” and “I saw something different”.
A WODB chat at Hibbett Middle School
Another observation I found very interesting was how students borrowed vocabulary from one setting and tried to apply (maybe misapply) it to a new setting. Have you ever heard of a scalene quadrilateral? Neither had I!
But I knew what the student meant, and so did the rest of the class. When I asked him to explain, he said a scalene triangle is a triangle with all three sides having different lengths. A scalene quadrilateral, therefore, is a quadrilateral with all four sides having different lengths.
Makes sense, doesn’t it? But, is it mathematically correct? I don’t know. My students gave me some pretty good arguments justifying their reasoning! We decided we needed to do some research on the word scalene. Does it only apply to triangles?
<Listen to Christopher Danielson talk about the ideas behind his book.>
Planning for next year
I plan to continue exploring this book and use it again next year, but with a few changes. I think it would be very beneficial to do this activity first, as a pre-assessment to our geometry unit. What do they already know? What misconceptions do they have?
At the conclusion of the unit, I would like to repeat the activity and see how their answers and explanations change. Will I see any growth in their vocabulary? Will they notice new differences based on the properties of the figures?
I think it would also be very interesting to have the students write their own reflections. Did they find this activity interesting and why? What do they think they learned from this activity?
My classes thoroughly enjoyed this book and our conversations about shapes. It generated deep thinking and brought up a few questions that we are still wondering about. In a good way!
Alabama Best Practices Center