Kemosha of the Caribbean (Paperback) 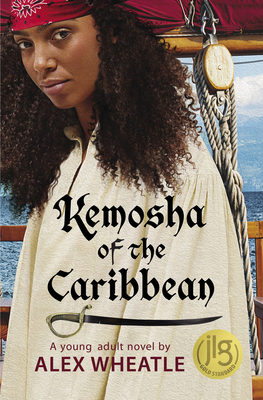 By Alex Wheatle
$15.95
Unavailable
Not Yet Published - Check back later for availability date

In 1668, a young Jamaican girl, Kemosha, secures her freedom from enslavement and finds her true self while sailing to Panama with the legendary Captain Morgan.

Kemosha of the Caribbean is Alex Wheatle's second historical YA fiction set in Jamaica. In 1668, fifteen-year-old Kemosha is sold by a slave owner to a tavern keeper in Port Royal, Jamaica--the wickedest city on earth. She soon flees from a brutal assault and finds herself in the company of a free Black man, Ravenhide, who offers her shelter and shows her a path to freedom. Ravenhide is a skilled barrel maker by day and an expert swordsman in the employ of the notorious Captain Morgan by night. Kemosha proves to be a natural with a sword, and after several weeks of training returns to defeat the tavern owner in a sword-fighting wager that wins her her freedom.

The duel catches the attention of Captain Morgan, who invites her to join Ravenhide on a pillaging voyage to Panama aboard his infamous ship, the Satisfaction. As her swashbuckling legend grows, she realizes she has the power to win freedom not just for herself, but for her kin and her soul mate Isabella as well--but not without paying a terrible price . . . Kemosha of the Caribbean enlightens as it entertains, bringing 17th-century Jamaica to life and creating an unforgettable heroine for all ages.

Alex Wheatle is the author of several best-selling books including the young adult novels Cane Warriors and Home Girl, the modern classic Brixton Rock, and the multiaward-winning Crongton series. He is the subject of the historical drama film Alex Wheatle, which is part of filmmaker Steve McQueen's lauded anthology series Small Axe. His body of work is a finalist for the 2021 NSK Neustadt Prize for Children's Literature and has won numerous awards, including the Guardian Children's Fiction Prize. Wheatle lives in South London.