After Us (The Before And After Series #2) (Paperback) 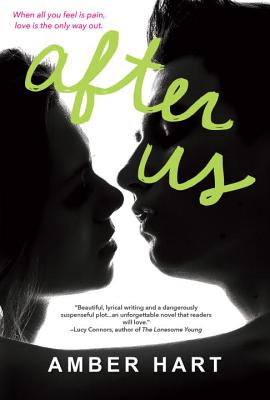 By Amber Hart
$19.26
NONE IN-STORE but we can probably order it for you

This is book number 2 in the The Before And After Series series.

"Beautiful, lyrical writing and a dangerously suspenseful plot. . .an unforgettable novel that readers will love." --Lucy Connors, author of The Lonesome Young

Melissa smiles. She flirts. She jokes. But she never shows her scars. Eight months after tragedy ripped her from her closest friend, Melissa is broken. Inside her grows a tumor, fed by grief, rage, and the painful memory of a single forbidden kiss.

Javier has scars of his own: a bullet wound, and the memory of a cousin shot in the heart. Life in the States was supposed to be a new beginning, but a boy obsessed by vengeance has no time for the American dream. To honor his familia, Javier joins the gang who set up his cousin's murder. The entrance price is blood. Death is the only escape.

These two broken souls could make each other whole again--or be shattered forever.

Our time will come. And we'll be ready.

Praise for Before You

"Will hook and hold you. . ." --National bestselling author K.A. Tucker

Amber Hart grew up in Orlando, Florida, and Atlanta, Georgia. She now resides on the Florida coastline with family and animals including, but not limited to, bulldogs, a cat, and dragons. When unable to find a book, she can be found writing, daydreaming, or with her toes in the sand. You can visit her on Facebook at www.facebook.com/amberhartbooks.

“Fast-paced action, plenty of heartfelt love scenes, and a series of shocking twists make this debut from Hart a surefire pick for fans of Simone Elkeles' Perfect Chemistry series. The planned sequel, featuring Faith’s best friend, Melissa, should be eagerly awaited.” – BOOKLIST on BEFORE YOU

“Hart debuts with a steamy romance about affirming love…As Hart alternates between Faith and Diego's self-aware and expressive first-person narratives, readers will be invested in the couple's intense cross-cultural relationship as they persevere despite an onslaught of personal and societal pressures.” – Publishers Weekly on BEFORE YOU

“This super-romantic opposites-attract love story is a guaranteed homerun for fans of swoonworthy romances like Perfect Chemistry and Crash Into You.” ­– Justine Magazine on BEFORE YOU

“Faith Watters plans to spend her senior year living up to everyone else’s expectations... However, her facade is challenged while serving as a student ambassador for a Cuban transfer student, Diego Alvarez.” – School Library Journal on BEFORE YOU

“Fans who loved the premise behind Simone Eldele’s Perfect Chemistry will want to give Before You a try. Using alternating points of view, Hart weaves a touching love story sure to capture readers’ hearts. What separates this “boy from the wrong side of the tracks” romance is the inclusion of the hero’s perspective, which will build a deeper connection with readers.” – RT Book Reviews, 4 Stars for BEFORE YOU

“[A] sexy romance…Hart’s writing in this debut conveys a lot of physical and emotional feeling…This riff on West Side Story is torrid and heartfelt.” – Kirkus Reviews on BEFORE YOU