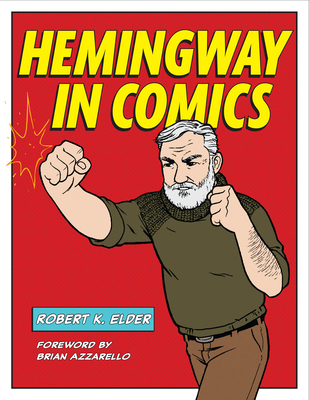 By Robert K. Elder
$29.95
NONE IN-STORE but we can probably order it for you

Ernest Hemingway casts a long shadow in literature--reaching beyond his status as a giant of 20th-century fiction and a Nobel Prize winner--extending even into comic books. Appearing variously with Superman, Mickey Mouse, Captain Marvel, and Cerebus, he has even battled fascists alongside Wolverine in Spain and teamed up with Shade to battle adversaries in the Area of Madness.

Robert K. Elder's research into Hemingway's comic presence demonstrates the truly international reach of Hemingway as a pop culture icon. In more than 120 appearances across multiple languages, Hemingway is often portrayed as the hypermasculine legend: bearded, boozed up, and ready to throw a punch. But just as often, comic book writers see past the bravado to the sensitive artist looking for validation. Hemingway's role in these comics ranges from the divine to the ridiculous, as his image is recorded, distorted, lampooned, and whittled down to its essential parts.

As Elder notes, comic book creators and Hemingway share a natural kinship. The comic book page demands an economy of words, much like Hemingway's less-is-more "iceberg theory," only in graphic form. In addition, he turned out to be the perfect avatar for comic book artists wanting to tell history-rich stories, as he experienced beautiful places during the most chaotic times: Paris in the 1920s, Spain during the Spanish Civil War, Cuba on the brink of revolution, France during World War I and during World War II just after the Allies landed in Normandy.

Hemingway in Comics provides a unique lens for considering one of our most influential authors. Not only for the dedicated Hemingway fan, this book will appeal to all those with an appreciation for comics, pop culture, and the absurd.

Robert K. Elder is the Director of Digital Product Development & Strategy at Crain Communications and the author or coauthor of seven books, including Hidden Hemingway: Inside the Ernest Hemingway Archives of Oak Park.