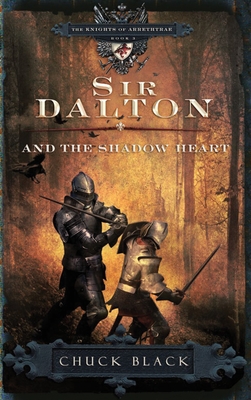 This is book number 3 in the The Knights of Arrethtrae series.

Sir Dalton, a knight in training, seems to have everything going for him. Young, well-liked, and a natural leader, he has earned the respect and admiration of his fellow knights, and especially the beautiful Lady Brynn.

But something is amiss at the training camp. Their new trainer is popular but lacks the passion to inspire them to true service to the King and the Prince. Besides this, the knights are too busy enjoying a season of good times to be concerned with a disturbing report that many of their fellow Knights have mysteriously vanished.

When Sir Dalton is sent on a mission, he encounters strange attacks, especially when he is alone. As his commitment wanes, the attacks grow in intensity until he is captured by Lord Drox, a massive Shadow Warrior. Bruised and beaten, Dalton refuses to submit to evil and initiates a daring escape with only one of two outcomes–life or death. But what will become of the hundreds of knights he’ll leave behind? In a kingdom of peril, Dalton thinks he is on his own, but two faithful friends have not abandoned him, and neither has a strange old hermit who seems to know much about the Prince. But can Dalton face the evil Shadow Warrior again and survive?
Chuck Black traveled with the Air Force as a communications engineer and F-16 fighter pilot before beginning a career as a product design engineer. Chuck and his wife, Andrea, homeschool their six children and have a family music ministry that travels regionally. He is the author of nine novels, has been published in The Old Schoolhouse e-zine, and has received praise from parents across the country for his unique approach to telling stories with biblical truths. Chuck and his family live in Williston, North Dakota.
“With sanctified imagination, Chuck Black transports readers back to the days of chivalry and valor, clashing steel, and noble conflict–but ultimately he transports readers to the eternal triumph of the King who reigns!”
– Douglas Bond, author of HOLD FAST In a Broken World, and Guns of the Lion

“Chuck Black is a word crafter who is able to weave Kingdom principles into the fabric of one’s moral imagination. The characters he has created and the passions they exude, will motivate readers to follow their examples, which have now been etched into their awakened conscience.”
– Mark Hamby, Founder and President of Cornerstone Family Ministries and Lamplighter Publishing

“Chuck Black is the John Bunyan for our times! Sir Kendrick and the Castle of Bel Lione is a reminder of the origins of the spiritual warfare we are to fight daily.”
–Iaci Flanders, inductive Bible study teacher and homeschool mom

“Not since C.S. Lewis’s Chronicles of Narnia have any fictional books boosted my faith so much. They make me cry with joy for what the King and the Prince do. They let me see our world through new eyes. I can’t wait to read the Knights of Arrethtrae series and experience more. The King reigns–and His Son!”
–Sophia, an avid reader

“I was so caught up in the books I would not do anything but read them. They were amazing…full of action, a little romance, and most of all, a love for the King and His Son. They made me feel as though I was truly traveling with the main character on his noble quest to spread the word of the King and His Son and standing in the middle of the Great Kingdom Across the Sea. I plan on reading the books over and over again. I loved the series so much!”
–Ethan, an avid reader