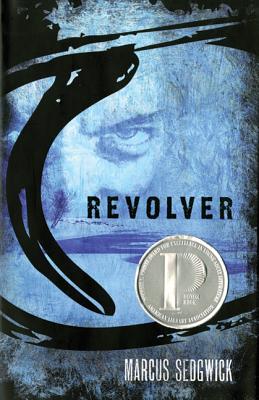 By Marcus Sedgwick
$16.99
Email or call for price.

A LOADED GUN. STOLEN GOLD. And a menacing stranger. A taut frontier survivor story, set at the time of the Alaska gold rush.

In an isolated cabin, fourteen-year-old Sig is alone with a corpse: his father, who has fallen through the ice and frozen to death only hours earlier. Then comes a stranger claiming that Sig's father owes him a share of a horde of stolen gold. Sig's only protection is a loaded Colt revolver hidden in the cabin's storeroom. The question is, will Sig use the gun, and why?

MARCUS SEDGWICK is the author of ten previous novels for young readers and has been short-listed for numerous children's book awards, including the Carnegie Medal, The Guardian Prize, and the Edgar Allan Poe Award. He lives in Sussex, England.

“A memorable tale, one that will appeal to fans of Gary Paulsen, Jack London, and even Cormac McCarthy.”—The Horn Book, STARRED

“A chilling, atmospheric story that will haunt readers with its descriptions of a desolate terrain and Sig’s difficult decisions.” —Kirkus Reviews, STARRED

““The bleak setting and ominous circumstances will draw immediate comparisons to a Jack London tale, but in a more accessible, spare style. Reluctant readers will be riveted by the suspense and the short chapters.” —School Library Journal, STARRED

“A carefully crafted story effectively rigidified by taut plotting and the crystalline atmospherics of its isolated setting.” —Booklist