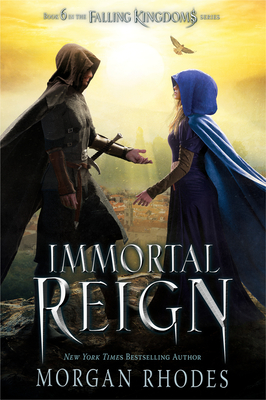 This is book number 6 in the Falling Kingdoms series.

In the epic conclusion to the Falling Kingdoms series, sworn enemies must become allies as they fight to save Mytica.

Jonas continues to willfully defy his destiny, but the consequences of plotting his own course are drastic. As the fight for Mytica rages on, he must decide just how much more he's willing to sacrifice.

Lucia knows there's something special about her daughter and she'll do anything to protect her, even if that means facing Kyan alone.

Amara is called back home to Kraeshia. Grandma Cortas has her own plans for Mytica's future. She promises Amara  power, revenge, and dominance if she agrees to be part of her scheme.

Magnus and Cleo's love will be put to the ultimate test. Dark magic is causing widespread destruction throughout the kingdom. Enemies across the sea are advancing. And unrest is stirring throughout the land. Is their love strong enough to withstand the outside forces tearing them apart?
Morgan Rhodes is the New York Times bestselling author of the Falling Kingdoms series. Under another pen name, she's an award-winning author of more than two dozen novels. Morgan lives in Southern Ontario. Connect with her on Twitter @MorganRhodesYA or visit fallingkingdoms.com for more info.
PRAISE for the FALLING KINGDOMS series: