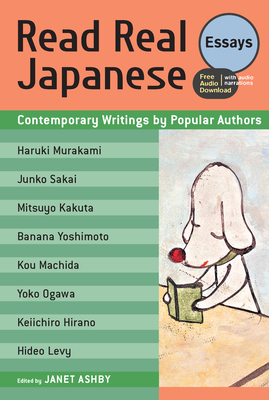 
NONE IN-STORE but we can probably order it for you
Now available with a free audio download, this outstanding collection of essays by Japan’s leading writers, in vertical text with translations, notes, allows readers to experience the work as a native speaker would.

There is a dramatic difference between reading Japanese that is tailored to students—and reading real Japanese that has been written for native speakers. The concocted variety tends to be insipid, flat, stiff, standardized, completely lacking in exciting and imaginative use of language. Read Real Japanese Essays, and its companion volume Read Real Japanese Fiction, allows readers to experience the work of several of today’s foremost writers as if they were lifelong Japanese speakers.

The pieces in Read Real Japanese Essays are informed by the personalities of the writers: Haruki Murakami, Banana Yoshimoto, Mitsuyo Kakuta, Junko Sakai, Yoko Ogawa, Kou Machida, Keiichiro Hirano and Hideo Levy. By turns humorous, serious, beautiful and biting, they have been selected on the basis of their appeal. All are stimulating works that will motivate readers to want more.

Just like real Japanese books, the text in this collection runs from top bottom and from right to left. For those needing backup, the essays have been supplemented with facing-page translations of the phrases used therein. In the back of the book, moreover, is a built-in Japanese-English learner’s dictionary and a notes section covering issues of nuance, usage, grammar and culture that come up in each essay. Best of all, the book comes with a free audio download containing narrations of the essays, performed by a professional voice actress. This will help users to become familiar with the sounds and rhythms of Japanese, as well as the speed at which the language is normally spoken.
JANET ASHBY is a freelance writer and translator who has lived in Japan since 1975. She has written a long-running column in the Japan Times on Japanese books, and has a particular interest in Japanese popular culture. She is the co-author of Japanese: The Spoken Language in Japanese Life and the author of the original Read Real Japanese, of which this book is a remake.