All Present and Accounted For: The 1972 Alaska Grounding of the U.S. Coast Guard Cutter Jarvis and the Heroic Efforts that Saved the Ship (Hardcover) 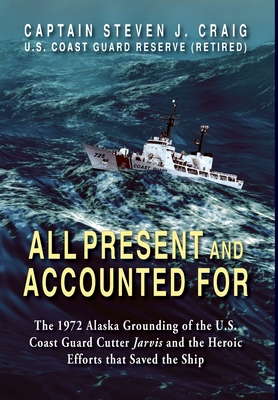 All Present and Accounted For: The 1972 Alaska Grounding of the U.S. Coast Guard Cutter Jarvis and the Heroic Efforts that Saved the Ship (Hardcover)

It was late November--one of the coldest periods to be on a ship near Alaska. The Coast Guard Cutter Jarvis had run aground during a severe storm and was taking on water. The engine room flooded, disabling the engines. Mountainous seas and gale force winds pounded the Jarvis, and to make matters worse, the ship was floating toward a rocky coastline that would surely destroy it and probably kill most, if not all, of the men.

The ship's captain ordered an emergency message be sent to the Seventeenth Coast Guard District Office in Juneau requesting Coast Guard assistance. But there were no Coast Guard assets near enough to provide immediate help.

At 7:04 p.m., for one of the few times in Coast Guard history, a MAYDAY call for help would come from a Coast Guard vessel.

This is the incredible story of the grounding and near sinking of the USCGC Jarvis and how her crew fought to save their ship--and themselves--from disaster.