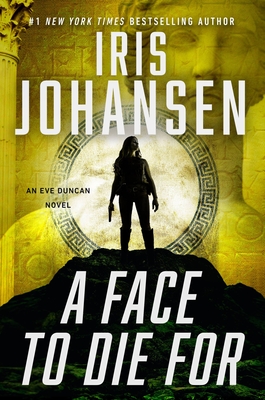 This is book number 28 in the Eve Duncan series.

Eve Duncan attempts to unearth one of history’s mostintriguing lost secrets in this adventure ripped from the pages of Greek mythology, by #1 New York Times bestselling author Iris Johansen.

Archaeologist Riley Smith has been obsessed with Helen of Troy since she was a small girl, trailing her professor father all over the world in search of the tomb of the world’s most beautiful woman. Professor Smith put his life on the line to prove that, instead of a myth, Helen had been a living, breathing queen.

Riley seeks the help of forensic sculptor Eve Duncan, who has the unusual skills necessary to recreate the face that launched a thousand ships—revealing Helen’s true appearance for the first time in history. But convincing Eve to take on the challenge will be difficult because her efforts could come at great personal risk to her and her family…

Tomb raiders have murdered Riley’s father, and now she is more determined than ever to reach the burial site first, avenge his death, and enlist Eve’s aid. Also on hand to help is dashing fixer and treasure hunter Michael Cade, but could he have his own secret agenda when it comes to finding Helen?

Now both Riley and Eve are in danger and in a race across one of the most remote parts of the world. All they have is their trust in each other and their belief in a dream as they hunt for Helen.

Iris Johansen is the #1 New York Times bestselling author of more than fifty consecutive bestsellers. Her series featuring forensic sculptor Eve Duncan has sold over twenty million copies and counting and was the subject of the acclaimed Lifetime movie The Killing Game. Along with her son, Roy, Iris has also co-authored the New York Times bestselling series featuring investigator Kendra Michaels. Johansen lives in Georgia and Florida.

"As loyal Johansen fans know, the real power plays occur during lengthy, emotionally charged wars of words and wills prior to any lethal action. With
a Homeric inspiration, Johansen’s newest trademark tale of exotic adventure pursued in the service of forensic science is more cerebral than violent."—Booklist

“These books are so action-packed and this one is no exception! But what I truly love, and what made me fall in love with this series in the first place, is seeing Eve do her job as a forensic sculptor.”
—AlwaysWithABook.com

“Plenty of action and well-written characters, especially Cade and Riley. Fans of the series will be happy.”
—RedCarpetCrash.com

"Dive into the explosive world of Iris Johansen, where villains get exactly what they deserve and the good guys - eventually - win the day. That's a world I want to live in!"—Tami Hoag, #1 New York Times bestselling author

"Just by seeing the Iris Johansen name . . . you know [it] will be an explosive, unforgettable story."—Suspense Magazine

"Johansen keeps readers on the edge of their seats."—Booklist

"Readers who have followed the amazing emotional, spiritual and physical journey that forensic sculptor Eve Duncan has undergone know just how truly great this series is . . . Johansen is a spellbinding storyteller and in a class by herself!"—RT Book Reviews

"Johansen knows what readers like and doesn't hesitate to give it to them."—Kirkus Reviews

"A best-selling writer whose talent is out of this world."—San Francisco Book Review

“As with the other Eve Duncan books, A FACE TO DIE FOR is filled with danger and suspense from the beginning and keeps building until the end.”—BookReporter.com