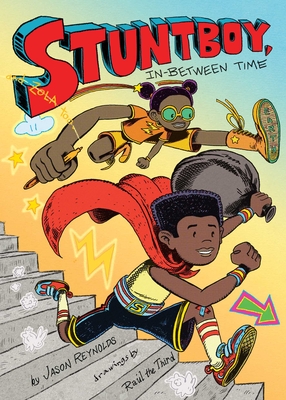 
Unavailable
Not Yet Published - Check back later for availability date

This is book number 2 in the Stuntboy series.

From Newbery Medal honoree and #1 New York Times bestselling author Jason Reynolds comes the sequel to the hilarious, hopeful, and action-packed middle grade novel Stuntboy, in the Meantime about the greatest young superhero you’ve never heard of, jam packed with illustrations by Raúl the Third!

Portico Reeves is the greatest superhero a lot of people have never heard of. He likes it that way—then no one can get in the way of him from keeping other other people safe. Super safe. He’s Stuntboy. He’s got the moves. And the saves. Except. There’s been one major fail.

He couldn’t save his parents from becoming Xs. Which is a word that sounds like coughing up a hairball. But don’t talk to him about the divorce, because of the hairball thing, and also, it gives Portico the frets.

What’s also giving him frets is his parents living on two separate floors in their apartment building. He’s never fully with one parent or the other. He’s in-between, all the time. The in-between time. And the elevator is busted, so to get between floors means getting past the bullies who hang in the stairwells.

So when Portico and new friend, Herbert, and best best friend, Zola, discover an empty apartment, unlocked, they are psyched. It’s a perfect hideout, and hangout, and it’s not half anyone’s…it’s all theirs. So they decide to make it their own…let’s say with stunts of the drawing kind. Problem is, that gives some Grown Up People the frets, which leads to double frets for Portico. And he’s not sure his arsenal of stunts can combat that.
Jason Reynolds is a #1 New York Times bestselling author, a Newbery Award Honoree, a Printz Award Honoree, a two-time National Book Award finalist, a Kirkus Award winner, a Carnegie Medal winner, a two-time Walter Dean Myers Award winner, an NAACP Image Award Winner, a two-time Odyssey Award Honoree, and the recipient of multiple Coretta Scott King honors. He’s also the 2020–2022 National Ambassador for Young People’s Literature. His many books include All American Boys (cowritten with Brendan Kiely); When I Was the Greatest; The Boy in the Black Suit; Stamped; As Brave as You; For Every One; the Track series (Ghost, Patina, Sunny, and Lu); Look Both Ways; Stuntboy, in the Meantime; Ain’t Burned All the Bright, and My Name Is Jason. Mine Too. (both cowritten with Jason Griffin); and Long Way Down, which received a Newbery Honor, a Printz Honor, and a Coretta Scott King Honor. He lives in Washington, DC. You can find his ramblings at JasonWritesBooks.com.

Raúl the Third is the illustrator of the New York Times bestselling Stuntboy, in the Meantime, by Jason Reynolds. He’s also a three-time Pura Belpré Award winner for ¡Vamos! Let’s Go to The Market! and his Lowrider picture book series written by Cathy Camper, the first of which, Lowriders in Space, also won the Texas Bluebonnet. Raúl is also the author and illustrator of ¡Vamos! Let’s Go Eat and ¡Vamos! Let’s Cross the Bridge. His work centers around the contemporary Mexican American experience and his memories of growing up in El Paso, Texas, and Ciudad Juárez, Mexico. He’s also contributed to the SpongeBob Comics series. He lives outside of Boston.