First Wilderness, Revised Edition: My Quest in the Territory of Alaska (Paperback) 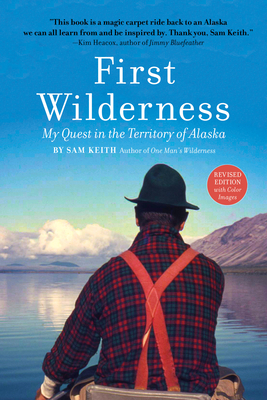 First Wilderness, Revised Edition: My Quest in the Territory of Alaska (Paperback)

The story behind the best-selling book One Man's Wilderness and how author Sam Keith and Dick Proenneke met and forged an everlasting friendship.

"Sam, you know right well you don't want to leave this country. Don't give up on it. Me and you got to figure something out."

After serving as a US Marine during World War II and attending college on the GI Bill, Sam Keith decided to seek adventure in Alaska as a laborer on the Adak Navy base. There he befriended Dick Proenneke, whose shared love of the outdoors, hard work, and self-reliance quickly bonded an alliance between the two. Together they explored the wilds of South Central Alaska while working on the Navy base, hunting and fishing with friends and breathing in the great outdoors. Keith was ready to leave after three years of finding almost everything he sought--not realizing then how his fate was intrinsically tied to his friend's and how it would lead to writing the best-selling book One Man's Wilderness.

Sam Keith passed away in 2003. But in 2013, his son-in-law and children's book author/illustrator Brian Lies discovered in an archive box in their garage a book manuscript, originally written in 1974 after the publication of One Man's Wilderness. First Wilderness is the story of Keith's own experiences, at times harrowing, funny, and fascinating. Along with the original manuscript are photos and excerpts from his journals, letters, and notebooks, woven in to create a compelling and poignant memoir of search and discovery. Foreword by Nick Jans, one of Alaska's foremost authors and photographers, and Afterword by Keith's daughter Laurel Lies.