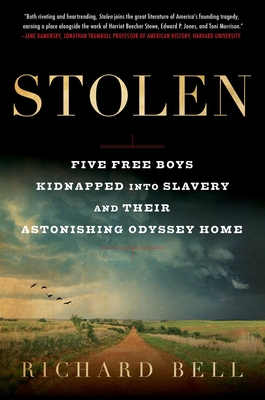 A gripping and true story about five boys who were kidnapped in the North and smuggled into slavery in the Deep South—and their daring attempt to escape and bring their captors to justice, reminiscent of Twelve Years a Slave and Never Caught.

Philadelphia, 1825: five young, free black boys fall into the clutches of the most fearsome gang of kidnappers and slavers in the United States. Lured onto a small ship with the promise of food and pay, they are instead met with blindfolds, ropes, and knives. Over four long months, their kidnappers drive them overland into the Cotton Kingdom to be sold as slaves. Determined to resist, the boys form a tight brotherhood as they struggle to free themselves and find their way home.

Their ordeal—an odyssey that takes them from the Philadelphia waterfront to the marshes of Mississippi and then onward still—shines a glaring spotlight on the Reverse Underground Railroad, a black market network of human traffickers and slave traders who stole away thousands of legally free African Americans from their families in order to fuel slavery’s rapid expansion in the decades before the Civil War.

Impeccably researched and breathlessly paced, Stolen tells the incredible story of five boys whose courage forever changed the fight against slavery in America.

Richard Bell teaches Early American history at the University of Maryland. He has received several teaching prizes and major research fellowships including the National Endowment for the Humanities Public Scholar Award. His first book, We Shall Be No More: Suicide and Self-Government in the Newly United States, was published in 2012. He is also the author of Stolen: Five Free Boys Kidnapped into Slavery and Their Astonishing Odyssey Home.

“’BOY LOST,’ read the advertisement placed in a newspaper by the father of one of the five free boys kidnapped in Philadelphia in 1825. Richard Bell’s heartbreaking and searing account of their story chronicles not only the agonies and atrocities of slavery, but the fragility of freedom, and the dauntlessness of resistance.” - Jill Lepore, author of These Truths: A History of the United States

“Opening an unknown world from an unsung tragedy that started in early national Philadelphia and stretched grimly South, Stolen offers a worm’s eye view of the leviathan of American slavery, and of some of its most dastardly perpetrators and its most remarkable survivors. Richard Bell has researched inventively and mastered a vast body of scholarship, as we would expect from so distinguished a historian. But he also imbues his tale with the deep humanity of a great novelist. Both riveting and heartrending, Stolen joins the great literature of America’s founding tragedy, earning a place alongside the work of Harriet Beecher Stowe, Edward P. Jones, and Toni Morrison.” – Jane Kamensky, Jonathan Trumbull Professor of American History, Harvard University

“Stolen is historical storytelling at its best. Bell makes brilliant detective work come alive with vivid, powerful writing. The saga of these five boys, kidnapped and smuggled from Philadelphia to Mississippi in the 1820s, captures both the powerful undertow of slavery in the free black communities of the North and the urgent dawning of the abolitionist movement. There's been nothing like it since Northup.” —Adam Rothman, author of Beyond Freedom's Reach: A Kidnapping in the Twilight of Slavery

“A well-told story… A deep dive into the extraordinary risks faced by free blacks in the antebellum era.”
—Kirkus Reviews

"It’s an uncomfortable part of New Orleans’ history, but one that needs to be told. Bell’s story — part thriller, part tragedy, part ode to the resilience of the human spirit — goes a long way to making that history come alive." - The Advocate

"Meticulously researched...Stolen is a remarkable narrative, in part, because of how Bell manages to clearly relate the complex politics of the time without ever legitimizing the choices made by those who bought and sold human lives." -NPR