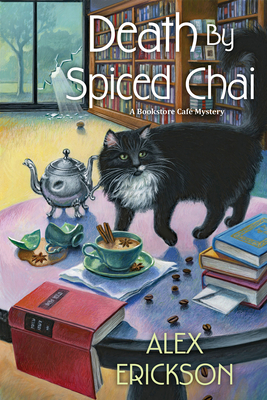 This is book number 10 in the A Bookstore Cafe Mystery series.

A charming, relatable small-town setting and a cast of complex characters sets Alex Erickson’s Bookstore Café Mystery series apart from the cozy pack—and this time the stakes are higher than ever, as bookstore owner Krissy Hancock becomes the target of escalating attacks. Smart and masterfully plotted, will appeal to fans of Leslie Meier, Cleo Coyle, and Carolyn Hart.

Since Krissy Hancock opened her bookstore-café in the charming small town of Pine Hills, Ohio, she’s discovered that murders don’t just happen between the pages. This time, she’s both suspect and target…

In a small town like Pine Hills, reputation counts for a lot. And for reasons that Krissy Hancock can’t figure out, someone is trashing hers. Cockroaches in the bookstore’s coffee, spiteful reviews, vandalism—Krissy is being framed for every bit of bad news around. Her boyfriend, local cop Paul Dalton, is on the case, but before they can source the saboteur, Krissy is in the frame for murder, too.

The murder weapon was a teapot full of Krissy’s favorite spiced chai, and all the local gossips are spilling the tea about her supposed involvement. But the real culprit has a grudge that’s been simmering for years. And unless Krissy can uncover the truth before the killer’s rage boils over again, it won’t just be her business in hot water—her life will be on the line too . . .
Alex Erickson is the author of the Bookstore Cafe Mystery Series and the Furever Pets Mysteries. He lives in Ohio with his family and resident felines, who provide endless amounts of inspiration. When he’s not writing, he enjoys spending his time gaming or playing music. Visit him online at AlexEricksonBooks.com or find him on Twitter at twitter.com/AEricksonbooks and on Facebook at Facebook.com/alexericksonbooks.