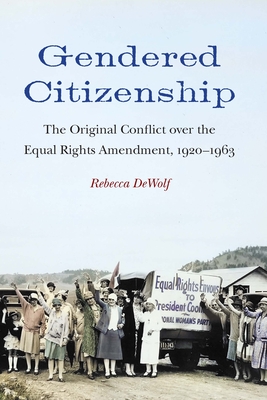 
NONE IN-STORE but we can probably order it for you
By engaging deeply with American legal and political history as well as the increasingly rich material on gender history, Gendered Citizenship illuminates the ideological contours of the original struggle over the Equal Rights Amendment (ERA) from 1920 to 1963. As the first comprehensive, full-length history of that struggle, this study grapples not only with the battle over women’s constitutional status but also with the more than forty-year mission to articulate the boundaries of what it means to be an American citizen.

Through an examination of an array of primary source materials, Gendered Citizenship contends that the original ERA conflict is best understood as the terrain that allowed Americans to reconceptualize citizenship to correspond with women’s changing status after the passage of the Nineteenth Amendment.

Finally, Rebecca DeWolf considers the struggle over the ERA in a new light: focusing not on the familiar theme of why the ERA failed to gain enactment, but on how the debates transcended traditional liberal versus conservative disputes in early to mid-twentieth-century America. The conflict, DeWolf reveals, ultimately became the defining narrative for the changing nature of American citizenship in the era.

Rebecca DeWolf is a writer and a historian with a PhD in American history. Her research has won recognition through grants and fellowships, including the Dirksen Congressional Research Grant. Her articles have appeared in the Washington Post, Frontiers, and New America Weekly.
"Gendered Citizenship is a must-read for history lovers, policy wonks, women's rights activists, and anyone else interested in how the U.S. government can support gender equality."—Rebecca Brenner Graham, Society for U.S. Intellectual History

“Like the sun peeking through the clouds, Rebecca DeWolf’s groundbreaking book clears the fog that has long surrounded the Equal Rights Amendment. . . . Anyone who wants to understand why the ERA is not yet law would be well advised to read this book.”—Johanna Neuman, author of Gilded Suffragists: The New York Socialites Who Fought for Women’s Right to Vote


“By tracing the origins of the ERA from the ratification of the Nineteenth Amendment to 1963, DeWolf offers a deep legal and judicial review of the debate around what constitutes equality under the law and the very nature of citizenship.”—Page Harrington, former executive director of the National Woman’s Party at the Belmont-Paul Women’s Equality National Monument


“Rebecca DeWolf has brought us a meticulously researched and vividly detailed account of the original ERA conflict that provides readers with rich context to trace how the arguments against gender equality of nearly a century ago continue to shape our cultural attitudes about the role and duties of women in the domestic sphere today.”—Betsy Fischer Martin, executive director of the Women and Politics Institute at American University

“Rebecca DeWolf has given us a book we desperately need—perhaps now more than ever. In Gendered Citizenship DeWolf peels back the layers of conflict surrounding the Equal Rights Amendment . . . to the core question regarding the true scope of American citizenship that arose in the wake of the passage of the Nineteenth Amendment securing women’s suffrage in 1920.”—Angie Maxwell, author of The Long Southern Strategy: How Chasing White Voters in the South Changed American Politics


“DeWolf’s thoughtful analysis of the forty-year struggle [between the ERA’s advocates and its foes] reveals that their disagreements were primarily ideological, not political. . . . This is a deep dive into the enduring constitutional struggle over the meaning of citizenship, a story that DeWolf tells with deep understanding and critical insight.”—Candice Shy Hooper, author of Lincoln’s Generals’ Wives: Four Women Who Influenced the Civil War—For Better and For Worse


“Gendered Citizenship impressively chronicles the competing ideologies—protectionism and emancipationism—present in the early fight for the ERA, showing us that how we understand gender regardless of political party has been foundational to the fight for women’s legal equality. DeWolf reveals how changing societal beliefs about sex and gender in the first half of the twentieth century influenced support for or backlash against the ERA. . . . Readers should consider Gendered Citizenship essential reading for crafting a twenty-first-century legal playbook that counters biological determinism and champions true legal gender equity!”—Shannon Weber, author of Feminism in Minutes and Activists Assemble: We are all Equal!