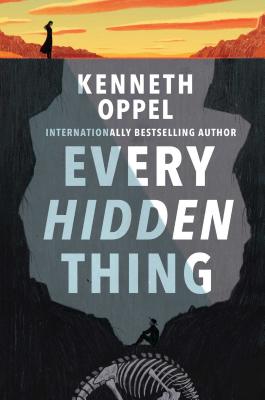 The hunt for a dinosaur skeleton buried in the Badlands, bitter rivalries, and a forbidden romance come together in this “fantastic” (The New York Times Book Review) novel that’s Romeo and Juliet meets Indiana Jones.

Somewhere in the Badlands, embedded deep in centuries-buried rock and sand, lies the skeleton of a massive dinosaur, larger than anything the late nineteenth century world has ever seen. Some legends call it the Black Beauty, with its bones as black as ebony, but to seventeen-year-old Samuel Bolt it’s the “rex,” the king dinosaur that could put him and his struggling, temperamental archaeologist father in the history books (and conveniently make his father forget he’s been kicked out of school), if they can just quarry it out.

But Samuel and his father aren’t the only ones after the rex. For Rachel Cartland this find could be her ticket to a different life, one where her loves of science and adventure aren’t just relegated to books and sitting rooms. Because if she can’t prove herself on this expedition with her professor father, the only adventures she may have to look forward to are marriage or spinsterhood.

As their paths cross and the rivalry between their fathers becomes more intense, Samuel and Rachel are pushed closer together. And with both eyeing the same prize, their budding romance seems destined to fail. But as danger looms on the other side of the hills, causing everyone’s secrets to come to light, Samuel and Rachel are forced to make a decision. Can they join forces to find their quarry—and with it a new life together—or will old enmities and prejudices keep them from both the rex and each other?

Kenneth Oppel is the author of numerous books for young readers. His award-winning Silverwing trilogy has sold over a million copies worldwide and been adapted as an animated TV series and stage play. Airborn won a Michael L. Printz Honor Book Award and the Canadian Governor General’s Literary Award for children’s literature; its sequel, Skybreaker, was a New York Times bestseller and was named Children’s Novel of the Year by the London Times. He is also the author of Half Brother, This Dark Endeavor, Such Wicked Intent, and The Boundless. Born on Canada’s Vancouver Island, he has lived in Nova Scotia and Newfoundland, Canada; in England and Ireland; and now resides in Toronto with his wife and children. Visit him at KennethOppel.ca.

"Oppel’s descriptions of the digs and the brainy romance between his vivid, multifaceted protagonists are notable high points....Oppel’s one of kid lit’s most reliable chameleons. Curiosity should be high."
— Booklist