Empire of the Superheroes: America’s Comic Book Creators and the Making of a Billion-Dollar Industry (World Comics and Graphic Nonfiction Series) (Hardcover) 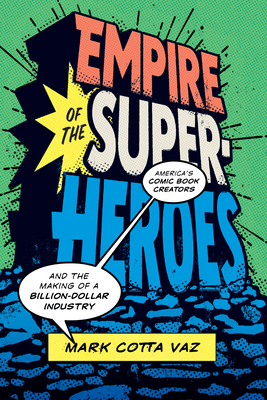 Empire of the Superheroes: America’s Comic Book Creators and the Making of a Billion-Dollar Industry (World Comics and Graphic Nonfiction Series) (Hardcover)

Superman may be faster than a speeding bullet, but even he can't outrun copyright law. Since the dawn of the pulp hero in the 1930s, publishers and authors have fought over the privilege of making money off of comics, and the authors and artists usually have lost. Jerry Siegel and Joe Shuster, the creators of Superman, got all of $130 for the rights to the hero.

In Empire of the Superheroes, Mark Cotta Vaz argues that licensing and litigation do as much as any ink-stained creator to shape the mythology of comic characters. Vaz reveals just how precarious life was for the legends of the industry. Siegel and Shuster—and their heirs—spent seventy years battling lawyers to regain rights to Superman. Jack Kirby and Joe Simon were cheated out of their interest in Captain America, and Kirby's children brought a case against Marvel to the doorstep of the Supreme Court. To make matters worse, the infant comics medium was nearly strangled in its crib by censorship and moral condemnation. For the writers and illustrators now celebrated as visionaries, the "golden age" of comics felt more like hard times.

The fantastical characters that now earn Hollywood billions have all-too-human roots. Empire of the Superheroes digs them up, detailing the creative martyrdom at the heart of a pop-culture powerhouse.

Mark Cotta Vaz is a New York Times best-selling author. His dozens of books include Living Dangerously: The Adventures of Merian C. Cooper, Creator of King Kong; The Invisible Art: The Legends of Movie Matte Painting, coauthored with Craig Barron; and, most recently, Pan Am at War: How the Airline Secretly Helped America Fight World War II, coauthored with John H. Hill.

[A] detailed, upbeat survey...Vaz’s history is comprehensive and finds ready drama in the exploitation of naive artists by rapacious publishers...This grand comic book adventure is not to be missed.
— Publishers Weekly

Crafting a history based on the artists who imagined bigger and better worlds but were often denied their credits and profits, this is a must read for anyone who loves comic book movies.
— Nerdist

[A] sympathetic chronicle of the inception and ascent of a modern mythology—a pantheon of bizarrely costumed characters with superhuman (if not supernatural) powers...Empire of the Superheroes is fascinating for its account of the business side of comic books.
— Shepherd Express

Rights issues have been a massively important topic for comic book creators and companies over the history of the industry, and Cotta Vaz does a spectacular job of tracking the major flashpoints and their importance. If you are a comic fan looking for an informative and entertaining summer read, Empire of the Superheroes is a great choice!
— Comic Book Yeti

Empire of the Superheroes draws back the curtain to provide an insider perspective on the American superhero comic-book business...anyone interested in the industry’s early decades will appreciate Vaz’s work in the archives, digging through records from legal disputes for insight into that era’s often shady business practices.
— International Journal of Comic Art