The People vs. Barack Obama: The Criminal Case Against the Obama Administration (Paperback) 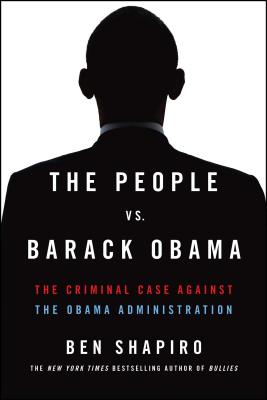 By Ben Shapiro
$17.00
NONE IN-STORE but we can probably order it for you

From the DOJ to the NSA, from the EPA to the Department of Health and Human Services, Barack Obama’s administration has become a labyrinth of corruption and overreach touching every aspect of Americans’ lives. The People vs. Barack Obama strips away the soft media picture of the Obama administration to reveal a regime motivated by pure, unbridled power and details how each scandal has led to dozens of instances of as-yet-unprosecuted counts of espionage, involuntary manslaughter, violation of internal revenue laws, bribery, and obstruction of justice.

The story of the Obama administration is a story of abuse, corruption, and venality on the broadest scale ever to spring from the office of the presidency. President Obama may be the culmination of a century of government growth—but more important, he is the apotheosis of the imperial presidency. Obama chooses when to enforce immigration laws, delays his own Obamacare proposals when it is politically convenient to do so, micromanages the economy, attacks the Supreme Court, Congress, and the sovereign states. And he proclaims that he alone is the voice of the people while encroaching on their rights. In The People vs. Barack Obama, Ben Shapiro brings Obama into the people’s court and addresses each of his abuses of power.