Unholy Messenger: The Life and Crimes of the BTK Serial Killer (Paperback) 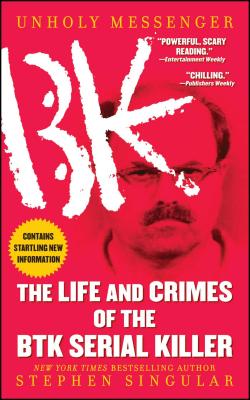 Unholy Messenger: The Life and Crimes of the BTK Serial Killer (Paperback)


NONE IN-STORE but we can probably order it for you
Behind a façade of Midwestern normalcy, Dennis Rader hid a life of bloodlust, sadism, and murder beyond imagining.

The upstanding family man, Scout leader, and church board president was well liked and trusted by his Wichita community.

Kansans -- and all of America -- would never recover from the truth: He was BTK, the madman who bound, tortured, and killed ten victims over the course of three decades.

Drawing on extensive interviews, including exclusive access to Rader's pastor and congregation, bestselling author Stephen Singular chronicles the horrific crimes, the investigation, the capture, and confession of BTK -- and, more deeply than any other account, reveals how his 2005 arrest shattered and challenged those in a circle of faith who thought they knew him best.
Stephen Singular has authored or coauthored seventeen previous books, including numerous New York Times and Los Angeles Times bestsellers. His titles include Presumed Guilty: An Investigation into the JonBenet Ramsey Case, the Media, and the Culture of Pornography; and Anyone You Want Me to Be: A True Story of Sex and Death on the Internet, coauthored with legendary FBI profiler John Douglas. Formerly a staff writer for the Denver Post, he lives in Denver. Visit his website at www.stephensingular.com.