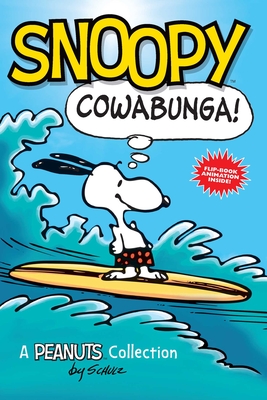 This is book number 1 in the Peanuts Kids series.

In Snoopy: Cowabunga, young readers can take a paws-first leap into the adventures, imagination, and hilarity of the Peanuts Gang!

Life is one big adventure for Snoopy. The cleverest canine to ever lounge about the funny pages is riding a wave into some charmingly humorous misadventures into some charmingly humorous misadventures. Charlie Brown’s beloved pooch struggles to master sports intended for humans, ventures into the woods to prove his worth as a Beagle Scout, and pals around with his feathered friend Woodstock, spreading merriment along the way.
Charles Schulz is a legend. He was the hand and heart behind 50 years of Peanuts, which featured one of the world's most beloved and recognizable cast of cartoon characters, until his death in 2000.