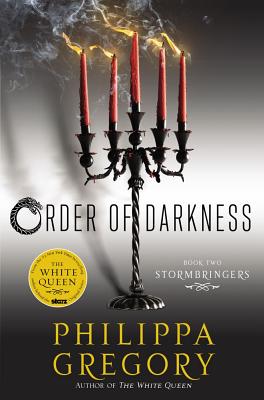 This is book number 2 in the Order of Darkness series.

The second book in a YA quartet filled with intrigue, mystery, and romance, from #1 New York Times bestselling author Philippa Gregory.

Italy, 1453. Luca and Isolde grow more and more attracted to each other as they continue their journey to unravel the mysteries throughout Christendom. But their travels are delayed by the uprising of an intense religious crusade that threatens the balance of the civilized world. Death lingers in the air as war ravages on, but this religious conflict is nothing compared to the arrival of an intense and deadly storm.

Caught in the midst of unimaginable chaos, Luca and Isolde must rely on one another in order to survive.

The second in Philippa Gregory’s four-book series delves further into a forbidden romance and an epic quest. And the tension builds as secrets about The Order of Darkness are finally revealed...
Philippa Gregory is the author of many New York Times bestselling novels, including The Other Boleyn Girl, and is a recognized authority on women’s history. Many of her works have been adapted for the screen including The Other Boleyn Girl. She graduated from the University of Sussex and received a PhD from the University of Edinburgh, where she is a Regent. She holds honorary degrees from Teesside University and the University of Sussex. She is a fellow of the Universities of Sussex and Cardiff and was awarded the 2016 Harrogate Festival Award for Contribution to Historical Fiction. She is an honorary research fellow at Birkbeck, University of London. She founded Gardens for the Gambia, a charity to dig wells in poor rural schools in The Gambia, and has provided nearly 200 wells. She welcomes visitors to her website PhilippaGregory.com.