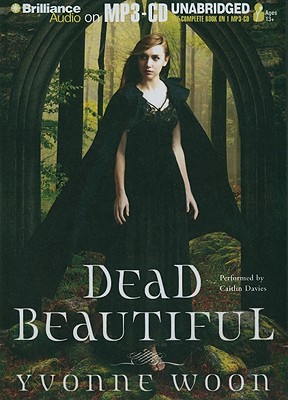 By Yvonne Woon, Caitlin Davies (Performed by)
Email or call for price
Out of Print

“Ever wonder why, when someone dies, we put them in a box and bury them six feet under? Read Dead Beautiful and discover the Undead, those children who have not been buried after dying, and Gottfried Academy, a boarding school that teaches humans and the Undead how to behave and get along with each other -- most of the time. This riveting story of selfless love, passion, and friendship combined with mystery and suspense will keep teens turning the pages.”
— Karen Briggs, Great Northern Books and Hobbies, Oscoda, MI

On the morning of her sixteenth birthday, Ren e Winters was still an ordinary girl. She spent her summers at the beach, had the perfect best friend, and had just started dating the cutest guy at school. No one she had ever known had died. . . . But all of that changes when she finds her parents dead in the redwood forest, in what appears to be a strange murder. After the funeral, Ren e's wealthy grandfather sends her to Gottfried Academy, a remote boarding school in Maine, where she finds herself studying subjects like Philosophy, Latin, and the "Crude Sciences." It's there that she meets Dante Berlin, a handsome and elusive boy to whom she feels inexplicably drawn. As they grow closer, strange things begin to happen, but Ren e can't stop herself from falling in love. It's only when she discovers a dark tragedy in Gottfried's past that she begins to wonder if the Academy and its students are everything they seem. Little does she know that Dante is the one hiding a dangerous secret, one that has him fearing for her life.