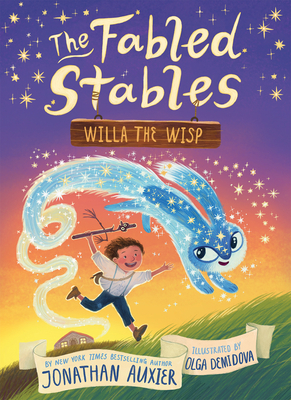 
NONE IN-STORE but we can probably order it for you
A new, fully illustrated chapter book series from New York Times–bestselling author Jonathan Auxier!

Welcome to the Fabled Stables, a magical building filled with one-of-a-kind creatures. Creatures including the Gargantula, the Yawning Abyss, the Hippopotamouse . . . and Auggie. Auggie is the only human boy at the Stables, and he takes care of all the other animals. The Fabled Stables have a mind of their own, and every so often, the building SHAKES and SHUDDERS, TWITCHES and SPUTTERS—it’s making room for a new arrival! It’s Auggie’s job to venture out and rescue a new creature from mortal danger. But will he be able to complete his mission before it’s too late? With some help from Fen (a literal stick-in-the-mud) and his animal companions, Auggie saves the day and makes a new friend in the process.

Jonathan Auxier is the New York Times bestselling and critically-acclaimed author of Peter Nimble and His Fantastic Eyes, The Night Gardener, and Sweep. He lives with his family in Pittsburgh. You can find him online at thescop.com
**STARRED REVIEW**
"Whimsical fantasy with the right amount of speed and cleverness for the audience."
— Kirkus Reviews

"Great for reading aloud, this lively first entry in a projected series offers a curious setting and an imaginative cast of characters."
— Horn Book Magazine

"Readers will root for Auggie and Willa the Wisp."
— School Library Journal

"Demidova’s chapter illustrations sparkle with whimsy and color and appear on almost every page, pulling double duty by enhancing the story and supporting children ready to step beyond leveled reader. . . Auxier’s gleeful and imaginative writing will charm."
— Booklist