Fly Trap: The Sequel to Fly by Night (Paperback) 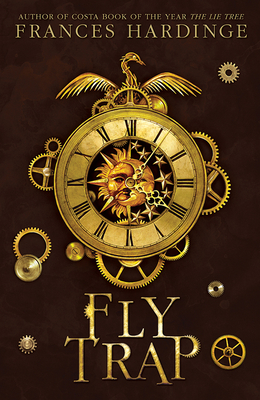 Fly Trap: The Sequel to Fly by Night (Paperback)


Email or call for availability
Mosca Mye and Eponymous Clent return in the sequel to Fly By Night, from award-winning author Frances Hardinge

Having successfully wreaked revolution upon the City of Mandelion, the pair find themselves escaping catastrophe by the skin of their teeth and seeking refuge in Toll. In this strange, aptly named gateway town, visitors may neither enter nor exit without paying a steep price. By day,
the city is well-mannered and orderly; by night, chaotic and debaucherous. Each resident, visitor, and passerby is allowed out in public only during one of these phases, with the segregation dependent on their name.

When Mosca and Clent are separated by this quirky law, they hatch a plot to escape. But wherever there’s a plot, there’s sure to be treachery, and wherever there’s treachery, there’s sure to be trouble—and trouble is what Mosca, Clent, and Saracen the Goose love best. With each trip around the clock, past deeds catch up with them and old enemies reappear. This time, it seems as if there’s no way out . . .

Frances Hardinge is the winner of the Costa Book of the Year for The Lie Tree, one of just two young adult novels to win the major UK literary prize. Known for her beautiful use of language, Hardinge has written many critcally acclaimed novels, including Cuckoo Song, Gullstruck Island, Fly by Night, Verdigris Deep, and Fly Trap. She lives in England. Visit the author at franceshardinge.com.
**STARRED REVIEW**
“[Hardinge] has a gift for well-turned prose . . . She again gives this winning trio a chance to show their better natures while surviving (often causing) trickery, betrayal, fires, riots and social upheaval.”
— Kirkus Reviews, starred review