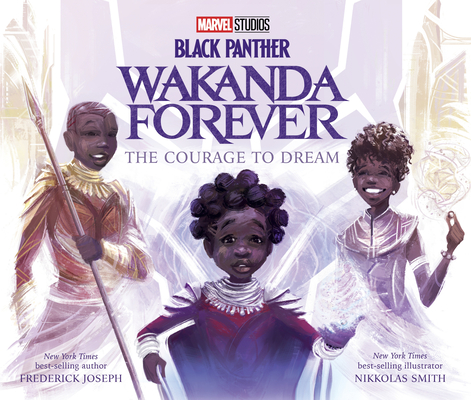 
NONE IN-STORE but we can probably order it for you
Set in the world of Black Panther: Wakanda Forever from Marvel Studios, The Courage to Dream is an inspiring picture book about a young Wakandan finding her destiny, from two New York Times best-selling creators.

The Courage to Dream tells the story of Assata, a young Wakandan who hopes to become one of the Dora Milaje, the warriors who protect Wakanda. But because of Assata’s disability, she lets go of her dream.

Assata’s light shows through all the same, introducing her to surprising friends: the princess Shuri, the warrior Okoye, and the powerful M’Baku. But only Assata can give herself what she’s missing: the courage to dream.

Frederick Joseph is the New York Times best-selling author of The Black Friend, Patriarchy Blues: Reflections on Manhood, and Better Than We Found It. An award-winning activist, philanthropist, and marketing professional, he was named to the 2019 Forbes 30 Under 30 list, is a recipient of the Bob Clampett Humanitarian Award, and was selected for the 2018 Root 100, an annual list of the most influential African Americans. Frederick Joseph lives in New York City with his wife, Porsche, and their dog, Stokely.

Nikkolas Smith is an Artivist, picture book author, and Hollywood film illustrator. He is the illustrator of The 1619 Project: Born on the Water and I Am Ruby Bridges, and the author-illustrator of The Golden Girls of Rio, My Hair Is Poofy & That’s Okay, and World Cup Women. Many of his viral, globally shared sketches are included in Sunday Sketch: The Art of Nikkolas. Nikkolas speaks on his artivism around the world, leading workshops in digital painting, character, and movie poster design. Learn more at NIKKOLAS.art.
"The distinctive, energetic illustrations use loose brushwork and mural-style images to bring this Wakandan story to life and incorporate a welcome range of diversity. An empowering and inspiring tale for all young dreamers."—Booklist