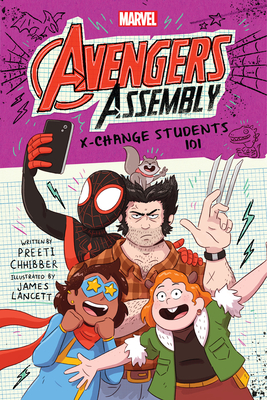 
On Our Shelves Now
The Avengers Assembly team takes a trip to Charles Xavier's Academy in their newest adventure!After training with the Avengers, Kamala, Doreen, and Miles are ready to branch out and expand their horizons. This semester, that means a trip north to study alongside the X-Men! If that wasn't enough, this semester features a field trip to the the Savage Land for a field trip -- an interdimensional planet that’s full of actual dinosaurs. Just what could go wrong? Turns out a TON in this laugh-out loud, action-packed adventure!
Preeti Chhibber has written for SYFY, BookRiot, BookRiot Comics, The Nerds of Color, and The Mary Sue. She has work in the anthology A Thousand Beginnings and Endings, a collection of retellings of fairy tales and myths, and is the author of the Spider-Man: Far from Home tie-in Peter and Ned's Ultimate Travel Journal for Marvel. She hosts the podcasts Desi Geek Girls and Strong Female Characters (SYFYWire) and has appeared on several panels at New York Comic Con, San Diego Comic Con, and on screen on the SYFY Network.
James Lancett is a London-based illustrator, director, and yellow sock lover! As a child growing up in Cardiff, he was obsessed with cartoons, video games, and all things fantasy. As he grew up and became a lot more beardy these inspirations held strong and so he moved to London to earn his BA Illustration and Animation at Kingston University. This degree opened the door to a job he had dreamt of ever since he was a kid and he now works as an illustrator and animation director.