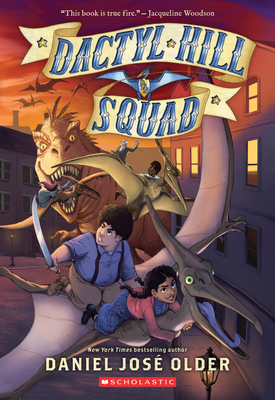 This is book number 1 in the Dactyl Hill Squad series.

“This book walks the awesome tightrope of acknowledging that fantasy could not possibly create villains more horrifying than the true figures of history, while allowing kids to engage with the fantastic that makes those realities bearable. This book lets kids who rarely see themselves as the heroes of historical fiction to see themselves there, and shows them pieces of history that may have been left out of their history lessons. At the same time, it’s a great adventure with a dynamic team at its core, who are a joy to meet and adventure with. And also? DINOSAURS!”
— Katherine Fergason, Harvard Book Store, Cambridge, MA

"An unforgettable historical, high-octane adventure." -- Dav Pilkey, author-illustrator of the Dog Man series
It's 1863 and dinosaurs roam the streets of New York as the Civil War rages between raptor-mounted armies down South. Magdalys Roca and her friends from the Colored Orphan Asylum are on a field trip when the Draft Riots break out, and a number of their fellow orphans are kidnapped by an evil magistrate, Richard Riker.

Magdalys and her friends flee to Brooklyn and settle in the Dactyl Hill neighborhood, where black and brown New Yorkers have set up an independent community -- a safe haven from the threats of Manhattan. Together with the Vigilance Committee, they train to fly on dactylback, discover new friends and amazing dinosaurs, and plot to take down Riker. Can Magdalys and the squad rescue the rest of their friends before it's too late?

Daniel José Older has always loved monsters, whether historical, prehistorical, or imaginary. His debut series for young adults, the Shadowshaper Cypher, has earned starred reviews, the International Latino Book Award, and New York Times Notable Book and NPR Best Book of the Year picks, among other accolades. His debut middle-grade series, Dactyl Hill Squad, was named to the New York Times Notable Book list and to the NPR and Washington Post Best Book of the Year lists, among others. He has worked as a bike messenger, a waiter, and a teacher, and was a New York City paramedic for ten years. Daniel splits his time between Brooklyn and New Orleans.

"Older fascinatingly blends thunder-lizard thrills with lesser-known but important aspects of American history... Readers will adore Magdalys Roca... Far from a natural hero, Magdalys displays a realistic mix of terror and gumption in the face of the monsters around her, reptilian and human. Where else will her adventures carry her? There's another installment of this mind-bendingly original series coming, sure to be eagerly awaited." -- New York Times Book Review

* "Epic...This high-energy title is perfect for middle graders, with its strong female protagonist, a fresh perspective on history, helpful notes and resources, and an honest portrayal of the complex topics of race and gender." -- School Library Journal, starred review

* "Delightful historical fantasy... Rooted in real events and attitudes, and appended with facts about the time, this fast-paced adventure makes for a memorable tale in which numerous characters of color take the lead." -- Publishers Weekly, starred review

"Dactyl Hill Squad has everything a reader could possibly want in a middle-grade book: action, adventure, magic, humor and dinosaurs. Magdalys is the same kind of young, engaging and flawed protagonist as Philip Pullman's Lyra -- a character readers can't help but love even when (especially because) she's frustrating. An entertaining and wholly fulfilling series opener."-- Shelf Awareness

"Daniel has imagined the unimaginable and in doing so sends readers on a dino thrill ride. I have been talking about this book nonstop! The kids, the dinosaurs, the Civil War, this book is true fire. It is everything I didn't even know I needed." -- Jacqueline Woodson, National Ambassador for Young People's Literature

"An extraordinary adventure full of heart and imagination that adults will enjoy reading just as much as kids! This is the story that would've made me fall in love with reading when I was a kid." -- Tomi Adeyemi, #1 New York Times bestselling author of Children of Blood and Bone

"Dactyl Hill Squad is an engaging, lively adventure with a heroine I wish I were, in a world I didn't want to leave." -- Jesmyn Ward, two-time National Book Award-winning author of Sing, Unburied, Sing

"Kids, the Civil War, and dinosaurs -- action doesn't get any better than this!" -- Tamora Pierce, New York Times bestselling author of The Song of the Lioness

"As an historian of New York City, I'm thrilled with Daniel José Older's melding of the best of history and fantasy in Dactyl Hill Squad. I couldn't put it down!" -- Leslie Harris, author of In the Shadow of Slavery

"This action-packed historical fantasy adventure should have wide appeal, leaving fans eager for the next installment. Dino-fueled fun with depth." -- Kirkus Reviews

"Older's rousing mix of actual history and dinosaurs will be irresistible to the upper-elementary and middle-school crowds." -- Booklist

"Middle schoolers will be drawn to this new alternate history adventure series.... Nonstop action keeps readers engaged... It is worth noting that this novel is richly infused with real historical people and places. The social and political issue of racial prejudice permeates the storyline... Look for this series to be popular with students and spur further interest in the Civil War." -- School Library Connection

* "Intelligent, rousing, and abundantly diverse, this is every bit as satisfying as the first installment." -- Publishers Weekly, starred review

"Older has middle-graders' number with this dino-charged series. Stampedes are likely!" -- Booklist