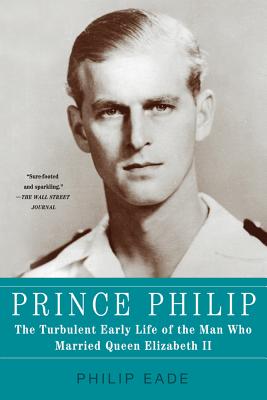 "Rich in drama and tragedy" (The Guardian), here is a mesmerizing account of the extraordinary formative years of the man married to the most famous woman in the world

Before he met the young girl who became Queen Elizabeth II, Prince Philip had a tumultuous upbringing in Greece, France, Nazi Germany, and Britain. His mother, Princess Alice of Battenberg, was born deaf; she was committed to a psychiatric clinic when Philip was eight. His father, Prince Andrew of Greece, already traumatized by his exile from his home country, promptly shut up the family home and went off to live with his mistress, effectively leaving his young son an orphan.

Remarkably, Philip emerged from his difficult childhood a character of singular vitality and dash—self-confident, opinionated, and devastatingly handsome. Girls fell at his feet, and the princess who would become his wife was smitten from the age of thirteen. Yet alongside his considerable charm and intelligence, the young prince was also prone to volcanic outbursts, which would have profound consequences for his family and the future of the monarchy.

In this authoritative and wonderfully compelling book, acclaimed biographer Philip Eade brings to vivid life the storm-tossed early years of one of the most fascinating and mysterious members of the royal family.

PHILIP EADE has worked as a criminal barrister, English teacher, and journalist. His first book, Sylvia Queen of the Headhunters, was a runner-up for the Biographers' Club Prize; his second, Prince Philip, became a Sunday Times bestseller. He lives in London.

“Sure-footed and sparkling… I finished Prince Philip with an admiration I had not expected for this brave, brusque, imaginative oddball.” —Ferdinand Mount, The Wall Street Journal

“[This] remarkable new biography . . . does for the royal consort what Helen Mirren did for his wife in the 2006 movie The Queen, breathing life into a figure who had seemed stiff and remote.” —The New York Times

“After reading this engaging biography of Philip's early years, it's easy to see how the future Queen of England fell for him.” —People Magazine

“[Prince Philip] sounds like a Greek tragedy: A young Greek princeling loses his family, his name, his home, his job, his identity, and agrees to marry a woman who, for the rest of his life, he must always, always walk a few paces behind.” —CNBC.com (a Best Book for the Holidays, 2011)

“Is there anything left to say about Prince Philip to justify yet another royal biography. Well, yes if you write as well as Philip Eade.” —The Washington Times

“Calorie-rich fare for those who enjoy snacking on royal stories.” —Kirkus Reviews

“The narrative is as suspenseful as any thriller. Truly, an excellent read.” —Sunday Times (London)

“Given what a rackety childhood Prince Philip had, it's astonishing that he hasn't spent half his life in therapy . . . by concentrating on the extreme oddity of his childhood, [Eade] makes the prince's character more explicable and therefore more sympathetic . . . the narrative is as suspenseful as any thriller. Truly, an excellent read.” —Lynn Barber, Sunday Times

“Eade's staunchly unhagiographic book is well spiced with royal titbits, and enlivened by a lemony tartness in the author's tone.... rich in drama and tragedy.....as thoughtful and unbiased an explanation as we are likely to get . . .” —Miranda Seymour, Guardian

“As Philip Eade demonstrates in this highly readable biography of Prince Philip's first 30 years, this extraordinary man endured a childhood of such turmoil that nowadays the social services would have placed him in care . . . This balanced, sympathetic, engaging book deserves to take its place among the first rank of modern royal biographies.” —Christopher Hudson, Daily Mail

“Perhaps this should be regarded as a sighting shot, staking a claim for the official biography which will eventually be commissioned. On the basis of this excellent book one can say that it would be a task that Eade was singularly well qualified to undertake.” —Philip Ziegler, Spectator