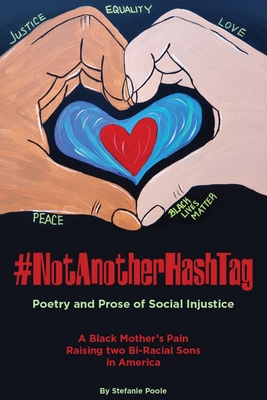 By Stefanie S. Poole, James Carter (Cover Design by)
$20.00
NONE IN-STORE but we can probably order it for you

Not Another Hashtag was written with passion and the burning desire from the heart of a Black mother who is married to her White husband who are raising two Bi-Racial sons in rural Georgia. The talks are never ending in the home of this family with their six and nine year olds. "Why did they have to die?" "Will I die?" "My brother is lighter than I am, so he will have a better life." This is just the tip of the iceberg.

400 years of slavery and oppression. Her family members being followed in Walgreens or pulled over by police officers night after night for a false "tail light" accusations. "He should not have been accepted to Stanford. He only got in because he is Black." After learning about the murders of Trayvon Martin, Philando Castile, George Floyd, and Rayshard Brooks all of this rang in her ears until she put pen to paper. She said, "Enough is Enough " Out came, #NotAnotherHashTag.