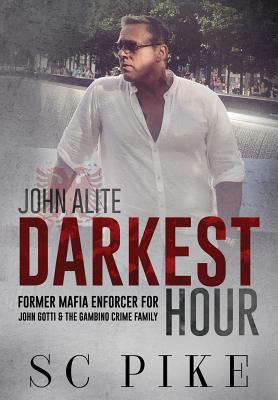 Darkest Hour is gritty, honest, and raw. It showcases a time and era in the streets of New York long forgotten and swept away by history.
John Alite's tale may only be one of many but is written in such a gripping way to the reader they can't help but be at the edge of their seat.
SC Pike tells a tale of a child born to the streets which raised John to become a killer for a notorious mafia family and how he now takes his knowledge and applies it to help children escape the kind of life and better themselves.

Former Mafia Enforcer for John Gotti and The Gambino Crime Family, John Alite, shares his life story in a unique way in hopes to dispel the mystique of the mob, and sway anyone from living a life of crime.

He's had too many Darkest Hours to count, but he's pushed through them all with a spirited perseverance, tenacity of mind and a strength of purpose. Just like everything else in his life, he's met adversity head on with fierce determination and a resoluteness to come out on top.

A college baseball scholarship was his way out of the inner city, but his dreams of wanting to go pro were crushed by an arm injury.

John Alite was forced to go back home to the only life he knew... where having to live on the streets of NY meant one thing... learning how to survive.

From a young age he found himself influenced by the wrong crowd. Enticed by the wealth, power, and prestige of the Mafia, he immersed himself in a world that was foreign to most. A society where policies were enforced by instilling fear.

Those at the top were about obtaining and harnessing absolute power while covertly using their own warped codes of ethics. Honor and loyalty were merely a misnomer. The cold, bitter truth was... he was expendable and his sworn allegiance was rewarded with betrayal.

On the run and unable to trust no one, John Alite was finally forced to confront his own demons... himself. Facing the harsh realities of who he was and what he had done wasn't pretty, and he had some serious, life-altering decisions to make. Ones that would come with a price.

Through a life of heartache, betrayal, and loss, comes a story of grace, healing, and redemption.