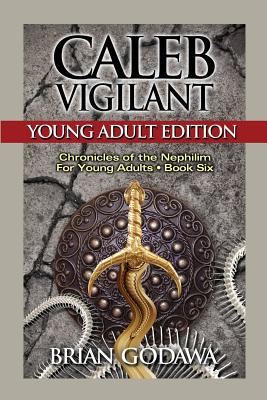 Giant Walls Will Come Tumbling Down.

Caleb Vigilant: Young Adult Edition is a version of the original novel Caleb Vigilant edited to be appropriate for ages 13 and above, Grades 8 and above. It is the sixth book in the series, Chronicles of the Nephilim For Young Adults.

In this second companion volume to Joshua Valiant, the story of the conquest of the Promised Land of Canaan continues. Moses has died, the Israelites stand poised to invade Canaan. Their first target: The impenetrable mighty walls of Jericho.

But God has been preparing a pagan woman named Rahab to help Israel. They soon discover through prophecy that she is a crucial link to God's plan of redemption for the Seed of Abraham. And she has fallen in love with an Israelite warrior whose child she bears.

Unfortunately, the Anakim giants of Canaan have also discovered Rahab's identity and have sent assassins to take her out.

At the same time, Joshua and Caleb assault the Anakim stronghold and face the tallest, most ruthless of all giants: The brothers Ahiman, Sheshai and Talmai.

Worse yet, the patron deity of the Anakim is the storm god Ba'al. They're going to need the archangels' help or they haven't got a chance.

This is what the War of the Seed has been building towards.

Biblical Fantasy Based on History and Ancient Mythology

Caleb Vigilant: Young Adult Edition is written in the spirit of The Chronicles of Narnia and The Lord of the Rings, blending fantasy and mythopoeia with history to retell the Biblical narrative with a fresh perspective, making it come alive in a new way, while staying true to the original spirit of the Bible story.