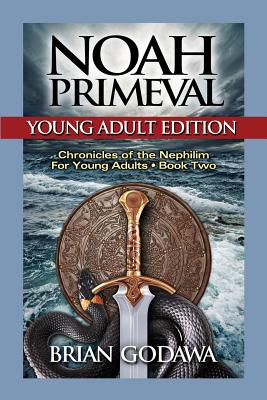 Nephilim Giants, Watchers, Archangels. This is Not Your Sunday School Noah's Ark.

Noah Primeval: Young Adult Edition is a version of the original novel Noah Primeval edited to be appropriate for ages 13 and above, Grades 8 and above. It is the second book in the series, Chronicles of the Nephilim For Young Adults.

A speculative retelling of the Genesis Bible story of Noah for a new generation.

In an ancient world submerged in darkness, fallen angels called Watchers rule as gods and breed giants called Nephilim. Mankind is enslaved to evil. Noah, a tribal leader, has been prophesied by his ancestor Enoch to save humanity from coming destruction. To rise against this supernatural evil and rescue his family Noah will need an equally supernatural army. But he also has to finish building his big boat.

Noah Primeval: Young Adult Edition is the second book in the exciting Biblical Fantasy series, Chronicles of the Nephilim For Young Adults.

It's Biblically and historically faithful, with added ancient imagination.

You will learn the origin of the Nephilim giants and the Watchers of Genesis 6.

Many of the strange oddities of the Bible will finally begin to make sense.

You will learn about a storyline thread in the Bible often overlooked: The War of the Seed.

Noah Primeval: Young Adult Edition is written in the spirit of The Chronicles of Narnia and The Lord of the Rings, blending fantasy and mythopoeia with history to retell the Biblical narrative with a fresh perspective, making it come alive in a new way, while staying true to the original spirit of the Bible story.