Two in the Far North (Paperback) 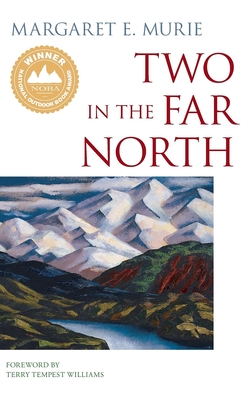 Considered by many to be the "Grande Dame of the American Conservation Movement," Murie recounts how she grew to understand, respect and love the Alaskan frontier during the early 20th century. From plagues of mosquitoes to the movement of caribou, Murie explores the many aspects of nature in Alaska. 32 illustrations. Map.

Margaret E. Murie was born in Seattle, Washington, but grew up attending public schools in Fairbanks, Alaska. She was the first woman graduate of the University of Alaska. Two months after her graduation, she married the biologist Olaus J. Murie. Their epic honeymoon journey by dogsled into the Brooks Range of Alaska's far north set the stage for their marriage and their careers with the U.S. Fish and Wildlife Service, and as director of the Wilderness Society. After Olaus passed away in 1963, Mardy continued writing and working tirelessly as a pioneer of the environmental movement. She received an honorary Doctor of Humane Letters degree from the University of Alaska, and President William J. Clinton awarded her the Presidential Medal of Freedom for her inspiring efforts to safeguard America's wilderness for future generations. Mardy passed away in her home in Moose, Wyoming at the age of 101.

"Simply put, Mardy Murie is a national treasure. Her life has made a certain kind of life possible for the rest of us. Generations to come will feel her imprint, though they may not know it was how she lived her life that allowed them to witness some of the last wild places on Earth. They may not know that it is because of her life that their souls and spirits can be fed by what is natural and wild. I hope those who come long after us will have TWO IN THE FAR NORTH in their satchels as they gaze upon these natural wonders and that they, too, will come away with same resolve she ad to protect these incredible gifts."      ---Robert Redford

“’Having been the basis of all our sophisticated society, doesn’t wilderness itself have a right to live on?’

This question, which Mardy Murie formed in her youth in Alaska and put formally to the United States Congress in her seventies, will ring on for as long as there is wilderness to ask about.”

“Mardy Murie, senior woman of the wilderness movement, has helped generations of men and women understand and then articulate their devotion to the work of preserving wild landscapes. She has a grandmother’s poise, a lover’s fire, a spouse’s allegiance, a curandera’s wariness about Congressional platitudes. When she is gone, the land will break down in tears.”   ---Barry Lopez